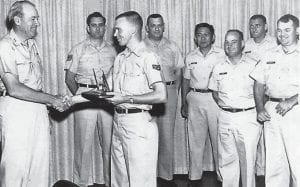 General Cunningham (left) was the boss of Everett Vanover (second from left) overseas and stateside.

In the early 1960s my wife was at the Cancer Center at Lackland Air Base in Texas for her treatments. It was during wartime, and as the noncommissioned officer in charge (NCOIC) of printing at Travis Air Force Base in California and our bases in the Pacific, I knew I was going to have a hard time taking care of my eight children and still work every day.

My youngest, Tammy, would need a place to stay while her mom was at the center and I was at work.

The wife of my boss, General Cunningham, came to the rescue. She helped many departments on base. She made arrangements for me to drop Tammy off to the base nursery on my way to work, and pick her up on my way home. She would not let me pay one cent.

She also arranged for my wife to call at night to talk to our kids and myself, again, at no cost to me.

General Cunningham was not only my boss, he was one of my best friends. We served together overseas and stateside for years.

Some years later General Cunningham was on a fishing trip in Alaska with a friend, when the aircraft they were flying hit an unseen log in the lake. Both were killed.

After all the help the gen- eral’s wife gave my family, it was my time to help her family. I helped in many ways. e general

Th and I were very close, and that was a sad time in my life.

His secretary on three of the bases to which he was assigned was from Whitesburg. Her name was Dale and she married Bob Douglas, and after they retired they lived in Sacramento, Calif.

As a teenager, she taught the fifth grade at Burdine for one year. Her dad was a great teacher in Whitesburg, and would later be high up in the schools there. He got Dale a job at the Pentagon where she met Bob Douglas. They had twin daughters.

Dale and I wrote and talked on the phone for years after she saw my name and photo in The Mountain Eagle.

She and Bob are no longer with us. They are buried near my wife at the Veterans Cemetery nearby.