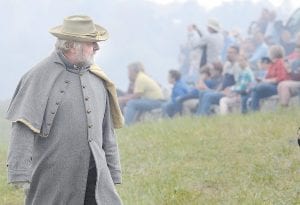 General Robert E. Lee, as portrayed by David “Butch” Chaltas of Letcher County, continued his battle commentary for spectators over the past weekend despite the heavy rains that fell during the Battle of Blountville Civil War Reenactment in Blountville, Tennessee. The two-day event was held at the Old Hawley Farm in Blountville. The historic town, located about eight miles northeast of Kingsport, was the scene of a four-hour-long Civil War battle fought on September 22, 1863, when Union troops marching into southwest Virginia and eastern Tennessee overwhelmed Confederate troops. (Photo by Ned Jilton II, courtesy of Kingsport Times-News)