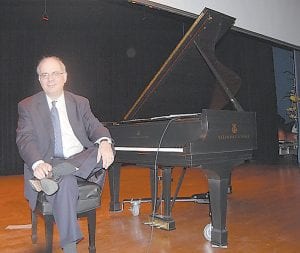 When the auditorium at Letcher County Central High School was built, a group of alumni from Whitesburg High School began to dream. They envisioned a Steinway grand piano sitting on the stage and one day being played by a professional pianist.

Glazier, who holds a Ph.D. in music from the Cleveland Institute of Music, was in Whitesburg on May 21 to dedicate a Steinway “B” concert grand piano that arrived at the school on December 17. The piano was paid for with $38,000 in money donated by about 200 Whitesburg High School alumni.

“All artists like a good piano and a Steinway is the best,” said Don Webb, a WHS alumnus from Vero Beach, Florida, who was here for Glazier’s performance. “There are some artists who won’t play on anything but a Steinway.”

Webb said the concert piano is an “asset” to the school, adding that only a few other schools in Kentucky have a Steinway.

“It’s the finest piano in the world, no question,” said Ron Gist, a central Kentucky piano store owner who helped bring Glazier to Letcher County. “This is the piano they would import in for pianists to play on.”

Glazier focused his performance on the music of famed American composers George and Ira Gershwin, known for such classics as “Summertime,” “Someone to Watch Over Me,” and “Strike Up the Band.” He also discussed the history of the Gershwins with the Letcher Central students.

Glazier is 46 years old and has performed in all 50 states and in several foreign countries. He told the students he became hooked on Gershwin music when he was nine years old and found an old 78 rpm recording of “Rhapsody in Blue” in his aunt’s record cabinet. He said he and his Aunt Esther then went to an Indiana library and checked out everything they could about the Gershwins, including books and sheet music.

Glazier wrote back to Ira Gershwin and the two began a long-term correspondence. At age 12, Glazier was invited to visit Ira Gershwin at his home in Beverly Hills, Calif.

“Since we met, and it’s been more than 30 years ago now, I can honestly say that not a day has gone by that I have not either discussed, played or studied the music of George and Ira Gershwin,” said Glazier. “I feel a very strong connection to them and through them to the other great composers and lyricists of their era. It gives me enormous pleasure to tell their stories and play their music for audiences everywhere.”

Glazier said he used the Gershwin story to urge the LCC students “to pursue their passions and dreams whatever they may be.”

“Dreams do come true,” he said.

The Steinway piano for LCCHS was bought from Gist Piano Center of Lexington and Louisville. Ron Gist, the owner, is good friends with Glazier.

Gist and Glazier were both impressed with the facilities at LCCHS and Gist told students they go to school in a “paradise.”

“You guys are so darn lucky to have this auditorium,” said Glazier.

Webb said the new school is very impressive to people.

“That’s too nice of an auditorium and a facility to not take advantage of it,” said Webb. “Maybe this will be the start of a community concert series. There are acts and tours that could play there.”

Gist was impressed by Webb and other alumni who were so passionate about obtaining a Steinway piano for the school auditorium.

Gist said that he, the alumni and Glazier all have one thing in common.

“What we are all about is giving back,” said Gist. “The bottom line for me is to give something back in the music business and the arts business. If you can make a positive difference in someone’s life, each day is worthwhile.”

“It was one of the most eventful nights in the history of Letcher County arts productions,” Letcher Schools Supt. Anna Craft said of Glazier’s performance. “If people missed it, they missed something wonderful. He is very talented.”