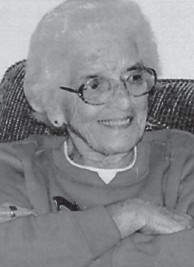 Gertrude Mason Fields, 89, died October 3 at her home at Kingscreek.

Born April 16, 1925, she was a daughter of the late John and Maggie Bentley Mason of Millstone. She was graduated from Fleming-Neon High School during World War II and sometimes entertained her family with stories of walking through mud and snow to catch the train or a bus to Neon during those hard times. As a young woman, she worked as a nursing assistant at the Seco Hospital in Seco. It was during her work there that she met her future husband, Herman Fields, when he came to be treated for an injured leg.

Mrs. Fields was at heart an Old Regular Baptist, though she did not take membership in any particular church. In recent years, she had enjoyed attending services at Kingscreek Community Church.

Gertrude and Herman Fields married on November 6, 1945. To this union were born five children, Helen Cooper and husband Glen, and Ada Damrell and husband Larry, all of Kingscreek, and Ronald and wife Rebecca of Charleston, W.Va.; and two stillborn infants, Richard and Anna Rose Fields.

She was preceded in death by her husband, Herman,

Those who know her best know that Mrs. Fields enjoyed visiting with her family, and no trip was too long to make for those special occasions until she simply became unable to travel. Until very recently, she still enjoyed trips to local attractions. She always enjoyed attending school activities for her children, grandchildren and greatgrandchildren. Mrs. Fields had a gift of kindness that set her apart from many others. She sincerely wanted everyone who came into her home to feel welcome and to be comfortable. She was a quiet, caring, non-judgmental woman who showed love through her demeanor and also through her cooking. Relatives, friends and neighbors talk of the many times she would whip up a batch of candy and play Spoon or Rook with either young or old. Herman Fields brought in the groceries (not her favorite task), and she took care of the rest.

Funeral services were held October 5 at the Kingscreek Community Church with Bill Craft and Jimmy Dotson officiating. Burial was in the Ratliff Cemetery at Kingscreek.