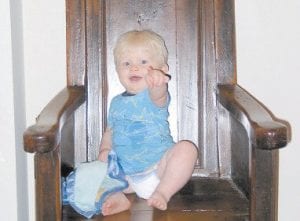 Don’t just talk to your toddler, gesture, too. Pointing, waving bye-bye and other natural gestures seem to boost a budding vocabulary. (AP Photo/Science)

Don’t just talk to your toddler — gesture, too. Pointing, waving bye-bye and other natural gestures seem to boost a budding vocabulary.

Scientists found those tots who could convey more meaning with gestures at age 14 months went on to have a richer vocabulary as they prepared to start kindergarten. And intriguingly, whether a family is poor or middle class plays a role, the researchers say.

Anyone who’s ever watched a tot perform the arms-raised “pick me up now” demand knows that youngsters figure out how to communicate well before they can talk. Gesturing also seems to be an important precursor to forming sentences, as children start combining one word plus a gesture for a second word.

University of Chicago researchers wondered if gesturing also played a role in a serious problem: Children from low-income families start school with smaller vocabularies than their betteroff classmates. It’s a gap that tends to persist as the students age. In fact, kindergarten vocabulary is a predictor of how well youngsters ultimately fare in school.

One big key to a child’s vocabulary is how their parents talked to them from babyhood on. Previous research has shown that higher-income, better-educated parents tend to talk and read more to small children, and to use more varied vocabulary and complex syntax.

Do those parents also gesture more as they talk with and teach their children?

To see, university psychology researchers Susan Goldin-Meadow and Meredith Rowe visited the homes of 50 Chicago-area families of varying socioeconomic status who had 14-month-olds. They videotaped for 90 minutes to count both parents’ and children’s words and gestures. Quantity aside, they also counted whether children made gestures with specific meanings.

This is not baby sign-language; parents weren’t formally training their tots. Instead, they used everyday gestures to point something out or illustrate a concept. A child points to a dog and mom says, “Yes, that’s a dog.” Or dad flaps his arms to mimic flying. Or pointing illustrates less concrete concepts like “up” or “down” or “big.”

The researchers found an income gap with gesturing even in toddlerhood, when children speak few words.

Higher-income parents did gesture more and, more importantly, their children on average produced 25 meanings in gesture during that 90-minute session, compared with an average of 13 among poorer children, they reported in the journal Science.

Then the researchers returned to test vocabulary comprehension at age 4. The poorer children scored worse, by about 24 points. Researchers blamed mostly socioeconomic status and parents’ speech, but said gesturing contributed, too.

It’s not just that richer parents gesture more, stressed Peggy McCardle of the National Institute of Child Health and Human Development, which funded the work.

“It’s that there’s a greater variety of types of gesture that would signal different types of meaning,” McCardle said. “It sure looks like the kids are learning that and it’s given them kind of a leg-up.”

The study doesn’t prove gesturing leads to better word-learning, but it’s a strong hint. Now scientists wonder if encouraging lowincome parents to gesture more could translate to toddlers who do, too, and in turn improve school readiness.