GETTING READY FOR THE SEASON 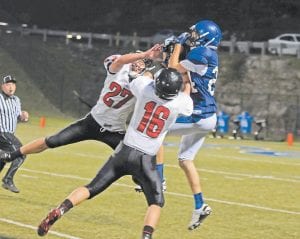 Letcher County Central High School’s Tanner Lucas battled two South Laurel defenders and held on to catch the pass during a scrimmage between the two teams at Ermine on August 15. Letcher Central will open its 2014 football campaign this Friday at home against Berea. (Photo by Chris Anderson)