By STEVE SZKOTAK The Associated Press 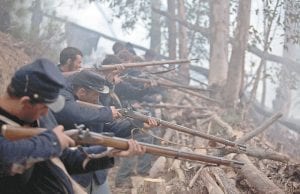 Within the first five minutes of the History channel documentary “Gettysburg,” a Union soldier splits open the skull of a Confederate with his rifle stock. Blood erupts from the battle wounds, splattering the camera’s lens.

Would you expect anything less from Ridley and Tony Scott, whose resumes include “ Top Gun,” “Black Hawk Down” and “Gladiator”? The brothers behind some of the biggest blockbusters don’t skimp on the horrors of war for the small screen in this docudrama.

“You know, when you’re watching a documentary, the danger is to romanticize,” Ridley Scott said in an interview with The Associated Press. “There was absolutely nothing romantic about this war whatsoever, no more than any other war.”

“Gettysburg,” which the Scotts executive produced, premiered on Memorial Day and airs again tomorrow night (Thursday) at 9 p.m., as History launches a fouryear initiative to commemorate the 150th anniversary of the Civil War. Actor Sam Rockwell narrates the film, which is directed by Adrian Moat.

Scott, who was interviewed while working on his highly anticipated “Prometheus” in London, credits Moat, but the Scotts’ influence is apparent in the cutaways that explain the lethal qualities of new weaponry and, of course, the unflinching lens when metal meets flesh and bone.

“I think what Adrian went for was the hard facts, if you like, what it was like to be in the face of a hail of bullets, and also what it was like to face what essentially was new weapons,” Scott said. “There was suddenly a leap forward in terms of weapons capability and exploding shells and things like that.”

The battle, which blunted Confederate Gen. Robert E. Lee’s bold invasion of the North, was fought from July 1-3, 1863, and pitted more than 165,000 troops battling in the rolling hills of Pennsylvania. Casualties totaled nearly 50,000, the most from a single battle in the Civil War.

“Gettysburg” includes commentary from Civil War scholars such as Edward Ayers, president of the University of Richmond, and camera trickery such as soaring overhead shots to explain battle strategies.

It also focuses on some of the big personalities of the battle, such as steely Lt. Col. Rufus Dawes on the Union side and the Southern firebrand Brig. Gen. William Barksdale.

But the documentary also pays attention to the troops.

They include Sgt. Amos Humiston, a soldier from upstate New York who died clutching a photograph of his children, and Pvt. Joseph C. Lloyd, a member of Barksdale’s Mississippian Brigade.

The brothers, collectively working as Scott Free Productions, are English and sons of a military man, though Ridley Scott downplays that.

“I’m an Englishman who did a film on Mogadishu, ‘Black Hawk Down,’” Scott said of the 2001 film based on Mark Bowden’s book.

As for his father, “Dad entered the second World War like any other man, trying to do the right thing.” He rose to brigadier general because of his knowledge of shipping and transportation and was involved in the planning of D-Day, Ridley Scott said.

Scott said his father, Francis Percy Scott, was an orderly man — a quality that seems to have taken hold in his son.

“His whole mindset on simplicity and order and reliability, I guess, kind of set into me. It’s just part of my upbringing, part of my schooling,” Scott said of his father.

Scott said unknown actors were purposely cast for “Gettysburg” to reinforce the realism. He credited Moat, a fellow Briton, for directing the hellish battle scenes and not panicking “in the face of hundreds of people.”

Scott said the Civil War remains relevant and worth revisiting 150 years later. And one of its causes — to end slavery — is a powerful call to arms, he said.

“It’s wrong to say that war doesn’t settle anything, because in this instance it did,” he said. “It’s a bit like why do we keep doing movies about Nazi Germany. Because it should never be forgotten.”