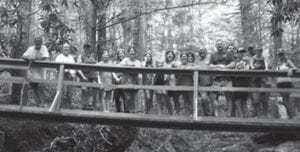 Hello everyone — I hope all had a wonderful week. It was lots of fun over the weekend as it was the Gibson family reunion. This is my favorite day of the year as I love being with family and friends.

Descendants of Joseph Hopkins and Manerva Gibson got together for a wonderful time. We had friends there mixed in with the family. It was so good to see everyone. We didn’t have a Gibson reunion last year and we all were ready to get together again.

There were approximately 110 family members and friends at the Gibson reunion. They came from Kentucky, Ohio, Indiana, Mississippi, Tennessee, Georgia, Alabama, Pennsylvania and probably a state or two I’ve left out. Everyone had a wonderful time. I appreciate all of those that helped to make the reunion a success.

We had so much food that was brought in. Relatives did wonders. There were fantastic water balloon toss games. Our son, Mark, filled up the water balloons. I think we’ll do this activity again next year. Our talent show was smaller than usual but so good. Li Fu Stigers of Crestview did an amazing job with the song “Danny Boy”. It made my eyes moist up. Parker McGinty, Harper Scroggins, and Sydney Scroggins of Madison, Mississippi sang for us also. 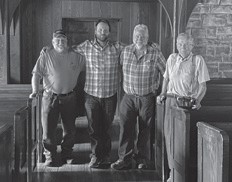 We had friends come in for the reunion. Jan, Scott, and Chad Sagstetter of Indianapolis, Indiana came in on Friday. They stayed at an Airbnb in Lynch. It was great spending time with them. It had been a couple years since we had seen Jan and Scott and more years for Chad. Chad and our oldest son, Greg, were best friends growing up as we lived next to each other. It was wonderful spending time together.

Mike and Jodi Miller of Clayton, Ohio also came in for the reunion. Greg, Chad, and Mike all grew up together. Mike and Jodi brought their camper and camped in our yard. Erica Gump of Pennsylvania also came in.

A big group of relatives and friends went to Bad Branch Falls on Saturday afternoon. They enjoyed their trip in the heat. There were some gorgeous photos taken. 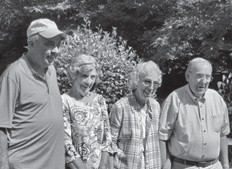 On Thursday evening we went to Town Hill for a cookout. Our son and daughter-in-law, Brad and Becky, John, Mike, and I went. When our son, Greg, made in it on his motorcycle Mike went down and picked him up so he could join us. When we got up there, we noticed there was a burned-out vehicle sitting there. The sons said it was an older Jeep Cherokee.

On Friday evening we went back to Town Hill just to sit around a fire. We had a bigger group with us then, Greg, Brad, Becky, Erica Gump, Jan and Scott Sagstetter, Chad Sagstetter, Mike and Jodi Miller, John, Mike and me. We had a good time sitting around and talking. The moon was huge up there. There was so much moonlight up there that you weren’t in the dark.

John and Libby Honeycutt, and Phoebe, Emerson, and Isla Stevens of Whitesburg took a trip to Mammoth Cave National Park. They enjoyed their time together. The photos that were shared looked great.

Carissa, Bucky, Briley, and Easton Brooks of Little Cowan and Valene, Jeremy, Landon, and Breanna Small of Williamson, West Virginia spent a week at Panama City, Florida. They enjoyed their time together. The photos that were shared looked like a wonderful time.

Janet Napier saw a bear in her yard. Mike and John saw a bear in the field by the house. John took a picture of a bear on the Gas Well Road. Randy Brown said he saw a bear near his place. Bears are everywhere. We also have a lot of deer around here. Mike, John, and I have seen a lot around us.

Kathy Sigrest, Emma and Ava Phillips of Clinton, Mississippi and I went shopping in Virginia one afternoon. I had never heard of Berks but now I like that store. We bought so much at Walmart that it was a wonder it all went in her car. We also made stops at Ollie’s and The Dollar Tree. It was so much fun being with them and shopping.

Happy anniversary wishes to Debbie and Jeff Vice of Flemingsburg. Their anniversary is on July 1, 2021.

I came up with two quotes for this week. Since I liked them both, I’m using them both.

The first one is attributed to Albert Einstein. “Rejoice with your family in the beautiful land of life!”

The second one is anonymous. “The love in our family flows strong and deep, leaving us memories to treasure and keep.”

If you have any news please email cowannews@aol.com . Thank you.

Have a wonderful week. Stay safe in all of the heat.