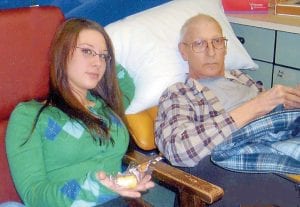 Staci Hicks and her father, Vernon Hicks, recently enjoyed eating a Hostess Twinkie together. Vernon Hicks was diagnosed with colon cancer in Jaunary 2007. Because of her father’s positive attitude, Staci has been able to cope and help others in the process.

When 13-year-old Staci Hicks wrote a feature article for a class assignment during this past school year, she never expected the impact it would have on her classmates and teachers.

Staci’s classmates at Whitesburg Middle School developed a sense of understanding toward her after reading the story about how her life has changed since she found out in January 2007 that her 65-yearold father, Vernon, has colon cancer.

“I think it is the first time they have had someone dealing close with cancer,” said Staci.

Staci’s language arts teacher, Debi Sexton, said the article gave everyone at her school an idea about “her life and what she was dealing with and where she was coming from.”

“It was so personal, so real and so touching,” said Sexton. “Before, only her two or three close friends understood what was going on and now everyone understands.”

Sexton said staff and students now understand why Staci would miss school on Fridays if she needed to go with her father to his chemotherapy treatments. Sexton said the article was a way for Staci to open up and tell her story. 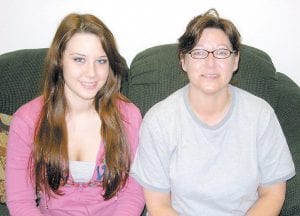 “Imagine having someone you love being told they have cancer and only have a year to live. Lucky for you, that’s not probably happening, and if it is, then maybe it was just a dream. For me, this is reality,” wrote Staci this past autumn.

In her article, Staci wrote about how she spent a lot of time traveling with her parents to doctors’ visits.

“My world has been filled with words like biopsy, PT scans, CT scans, MRI, radiation and chemotherapy,” she wrote.

Staci described how she has watched her father lose his hair, hearing, memory and an excessive amount of weight.

“Sometimes he forgets my name, and is lucky if he remembers his own. He can no longer drive, and can barely walk and feed himself at times, and it is only going to get worse,” she wrote.

Staci also wrote about how she and her mother, Fran, have befriended other cancer patients at the Kentucky Cancer Clinic in Hazard and how they talk to them and help them.

“She no longer had to cover her head with a scarf or cap. Phyllis even started wearing makeup. She said that she felt pretty again,” Staci wrote about a woman for whom she bought a wig.

Staci now makes sure that Phyllis has a quilt to keep her warm in the cold chemotherapy room, and when she and her mom go out to lunch, they bring food to Phyllis as well.

“It makes me feel good inside that I make a difference,” wrote Staci, adding that helping others has helped her deal with her dad being so sick.

“We make the most of the time my dad has left, and by helping Phyllis, I consider myself forever blessed to have touched another life in such a positive way,” she wrote.

Staci’s story also inspired her peers to save their spare change to help cancer patients. The school’s UNITE (Unlawful Narcotics Investigations, Treatment and Education) Club provided food baskets to families at Thanksgiving and bought gas cards for families at Christmas. Students collected gently-used magazines and books for the cancer clinic in Hazard. They also purchased a new television for patients and their families to use at the clinic and collected $100 for the Letcher County Chapter of the American Cancer Society’s Relay for Life.

Fran Hicks said her husband was diagnosed with colon cancer shortly after she took him to the emergency room in January 2007 when she knew something wasn’t right.

She said decided to seek help one Sunday morning when Vernon Hicks reached for a hammer, but did so in the opposite direction of where the hammer was.

“I took him to the emergency room and the doctor said they found a tumor at the base of the brain,” said Fran Hicks. “It started in the colon and it was already in his liver, lungs and brain.”

Mrs. Hicks said her husband had been going to the doctor for three months prior to his cancer diagnosis and had undergone preliminary tests which led doctors to believe he had an inner ear infection.

When Staci accompanies her parents to treatments she listens to everything the doctors have to say. Her mother says she is not shielded from any information concerning her father’s prognosis.

“She knows he is not going to get better and she deals with that,” Mrs. Hicks said. “We have talked about the funeral.”

Fran Hicks said her husband is now bedfast and can longer do many things he and Staci once did together.

“They would go fishing, go to the park, and McDonald’s,” Mrs. Hicks said. “They would do summer things together. They can’t really do that anymore. At 13 she basically feels like she lost her dad.”

With Vernon Hicks’s weight dropping from 231 pounds in January 2007 to 82 pounds in May 2008, Staci has had to help her mother take care of her father and in the process has grown up quickly.

“Things that a child would not have to do, she has had to help me do,” Mrs. Hicks said.

Fran Hicks and Staci agree that Vernon Hicks’s positive attitude and his faith have helped him battle the cancer.

“He has such faith,” said Fran Hicks. “He asked the Lord for 16 months. Whatever else He wanted to give him after that he would take. He has never been angry about it.”

“It all has to do with Dad’s attitude,” said Staci. “If he didn’t care it would be harder.”

“We’re happy, even though our life is not like everyone else’s,” said Fran Hicks. “We do believe in God and we do believe that he is going somewhere better. We have a positive attitude about everything.”

Mrs. Hicks said the support of teachers and students, and of neighbors in Bottom Fork, continues to help her and Staci get through hard times.

“It is humor, too, that gets us through,” she said.

Fran Hicks said it has been difficult to watch her husband, a strong man of many talents and a former Marine, lose his strength.

“It is hard to see a man that is so intelligent,” said Fran Hicks. “There was nothing the man couldn’t do. He could repair a car. He could build a house. He built our beds.”

Staci knows her father loves her and wants her to grow up and be successful.

“He told her he other day, ‘Staci, just be a good girl,'” said Fran Hicks. “Be a person not a people. Be what you do, not what others do.”

Fran Hicks said that Vernon Hicks has always told Staci to get a good education so she wouldn’t have to depend on others.

“Don’t listen to what people say, what they tell you to do, do what you know is right,” said Fran Hicks.

Staci, who will be a freshman at Letcher County Central High School in August, has decided that she would like to become a nurse for child cancer patients.

“They need someone who cares and understands,” she said.