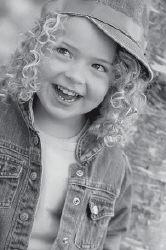 Baylee Nicole Hatton, the four-year-old daughter of Jim and Wendy Hatton of Richmond, has returned from the International Modeling & Talent Association (IMTA) convention in New York City. Baylee is a model at Images Model and Talent Agency in Lexington, and was chosen to compete in the IMTA.

Baylee is the granddaughter of the late William “Bill” Hatton and Juanita Hatton of Whitesburg.