Girl, 5, is losing memory to a rare, fatal disease 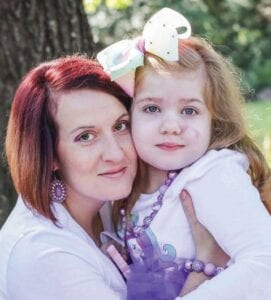 Loralei was a normal, happy baby.

“She literally woke up one morning and never spoke again,” said her mother, Brandi Amburgey.

Amburgey has two older boys who are on the autism spectrum, so she assumed her daughter was as well, but then she began falling. Amburgey took her to the Shriner’s Hospital last December to find out if it was caused by intoeing (pigeon toes). It wasn’t.

In February, the family learned that Loralei, now five years old, has a rare genetic disease called Sanfilippo syndrome. There is no treatment and no cure. She likely will not live to see 15 years old.

“I know autism wouldn’t take my babies out of this world, but what Loralei has makes me feel so helpless,”

Amburgey said. “She’s going to die and there’s nothing I can do.”

Sanfilippo syndrome, also known as mucopolysaccharidosis type III, is only known to affect about one child in every 100,000. It is caused by a missing gene that causes the body to be unable to process certain sugars that gather on the brain and spinal cord. Since this trait is recessive, both parents have to be carriers of the genetic mutation in order to pass it on the child. Carriers never know they have it. 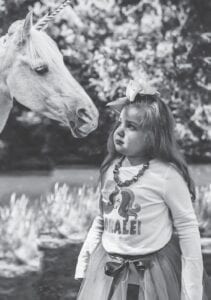 Five-year-old Loralei Amburgey is seen in this photo provided by her mother, Brandi Amburgey.

Sanfilippo is sometimes called “childhood Alzheimer’s” because Alzheimer’s, which affects mostly older adults, is caused by proteins that develop and close synapses in the brain much like carbon buildup on spark plugs in a car. As the gaps close, the nerves can no longer transmit signals, and both Sanfilippo and Alzheimer’s patients’ brains begin to delete memories, beginning with short term memory but getting progressively worse.

“They stop breathing. They forget how to breathe,” Amburgey said.

Eventually, Amburgey said, her daughter will spend her days in a wheelchair with a feeding tube inserted in her stomach because she will be unable to eat.

So far, Loralei is the only child she knows of in Letcher County with the disease, but Amburgey said she hopes that Loralei’s story will help other parents identify what is wrong with their children. She waited three years to learn what was wrong with Loralei because the disease is so rare, few parents or doctors recognize it.

Monday, November 16, is World Sanfilippo Day, and Amburgey plans to hold an event at Isom to raise awareness of the disease. At 5:30 p.m. that day, or as soon as it gets dark, the family will release sky lanterns to float into the night sky as a way to draw attention to their cause. The lanterns will be released from the parking lot of Loralei’s stepfather’s church next to the intersection of KY 15 and Isom Drive, near the Isom Double Kwik.

Loralei most likely won’t be at the event. The disease causes her to be immune suppressed, and Amburgey said she has been pretty much “on lockdown” since her diagnosis in February, about the same time COVID 19 began to spread.

But, Amburgey said Loralei is still a happy baby with a mind of a 10-month old, excited and always wanting to play, even though she falls frequently. Amburgey said her disease is Type A, the most severe and deadly form of the disease. Doctors can’t give a timeline for how long Loralei might survive, but the typical life expectancy for a child with Type A is 15.

As the child becomes older, he or she shows progressive intellectual disability, seizures, enlarged liver and spleen, coarsening of the facial feathers, including prominent brow ridges, loss of hearing and ability to walk, loss of ability to eat, and finally, death.