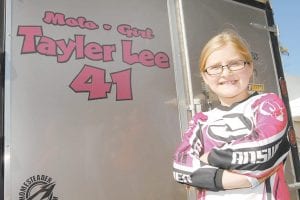 GIRLS CAN DO IT, TOO – Tayler Adams, 9, has already been winning races on the motocross circuit for more than two years. (Photo by Earl Neikirk/Bristol Herald Courier)

The Oscar Award-winning 2006 motion picture “Little Miss Sunshine” chronicled the adventures of a young beauty pageant contestant who won hearts with her smile and carefree approach to life.

The motocross version of “Little Miss Sunshine” is Tayler Adams, a 9-year-old from Whitesburg who has been winning races for the past two and a half years after capturing dozens of pageants across the nation.

“I like motocross better because it’s all about what you can do on the track,” Adams said. “There are no judges. You just get a bike, put on some gear and go racing.”

Adams was among hundreds of riders involved in the 20th annual Suzuki Top Gun Showdown held at Muddy Creek Raceway in Blountville last month. The event has been featured in Sports Illustrated.

In some ways, the Adams story is familiar to many motocross prodigies. Her older brother, Donnie, competes on the pro level and her family supports her in year-round events held around the East Coast. Adams could ride a mini-bike by age four, yet her mother, Gina, was reluctant for her little girl to enter the high-risk sport. 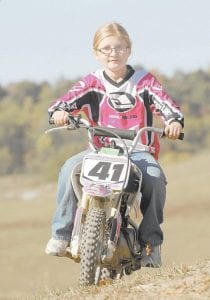 When Tayler Adams began racing motorcycles she would often get lapped by other riders. Now she’s lapping them. (Photo by Earl Neikirk/Bristol Herald Courier)

“I tried to keep Tayler away because I had seen how many riders end up with broken bones,” Adams said. “She just decided one day to give up pageants for motocross.”

And the fourth-grader has been winning ever since, despite dealing with two broken shoulders, one dislocated shoulder and a broken arm within the past year.

“I’m not afraid or worried about anything. In fact, I want to go sky diving soon,” Adams said. “Things can get interesting when there are 41 other bikes at the starting gate, though. The first time I dislocated my shoulder, I was riding on my favorite bike when I hit a speed bump while going up a big hill.

“That’s just part of motocross, though. I love to take jumps and try to be the first off the start.”

That approach practically horrified Gina Adams in a recent Muddy Creek event, when Tayler hit a cross-rut after soaring over an infamous hill.

“I was worried because there have been several crashes in that section of the track, but Tayler didn’t panic and actually stayed in second place,” Adams said. “She’s been able to win 15-20 major races and continues to improve. At first, Tayler was getting lapped. Now she’s lapping other riders. The self-confidence gained from the beauty pageant helped.”

Tayler competed in the 50cc class for 7-8-year olds this season along with the Oil Injected 50cc class, where she ranked second in points before taking a break from the Mega Series. Those achievements are especially impressive when you consider Tayler competes against boys.

“The boys thought I was just out there to ride around at first, but now they realize I’m pretty good,” said Adams, also involved in cheerleading and dance. “Sometimes boys get upset when I beat them, but mostly it’s the daddies who get mad.”

Donnie Adams has been impressed with the rapid maturation of his young sister.

“Tayler is fearless,” Donnie said. “I always worry about my sister, but she’s got plenty of talent.”

And Tayler is eager to keep spreading more sunshine in her own way.

Reprinted with permission from the