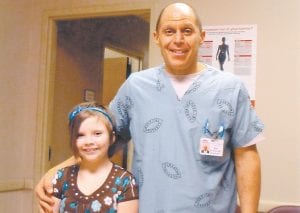 Eight-year-old Hannah Click was photographed recently with Dr. Alex Funicello, a Hazard ARH surgeon who performed an emergency operation after her go-kart injury.

It wasn’t anything out of the ordinary for spunky eight- year- old Hannah Click to hop on the go-kart with her 23-year-old sister to take a couple laps around her family’s Knott County home.

But while it was something she did numerous times before, that day last August would unfortunately turn out to be anything but ordinary for the Click family — or for Hazard ARH Regional Medical Center surgeon Alex Funicello, MD.

The accident happened quickly. As the sisters rounded a curve, Hannah’s long hair blew back into the sprocket chain of the go-kart. Within seconds, the child’s hair was stuck, pulling her head into the circulating chain and resulting in a traumatic 270-degree laceration to her scalp.

“We know the Lord was taking care of her,” says Hannah’s mother, Tammy. “We are so lucky it didn’t break her neck, because with the force of the motor that easily could have happened.”

Seeing the severity of her young daughter’s injury, Tammy, a former childcare worker, managed to remain calm while attempting to slow the bleeding from the wound with a rolled towel until the family could meet an en-route ambulance to take Hannah to the Hazard ARH Regional Medical Center’s emergency room almost 20 miles away. 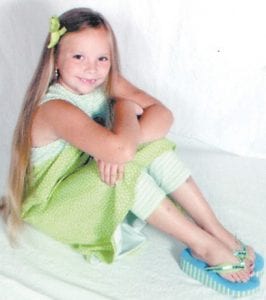 Hannah Click poses in a portrait taken by the Olan Mills studios before she was injured in a go-kart accident in Knott County.

“ We knew it was very serious and she needed the best doctor she could get,” Mrs. Click said. “When we got to the emergency room, I told them flat out, ‘I want the best surgeon you’ve got in this hospital and no less.’ When it’s your child, you want the best they have in the hospital. For yourself, you’ll take second or third best if you have to, but nothing but the best for your kid.”

And Mrs. Click says that is exactly what she got in Hazard ARH surgeon Alex Funicello, MD., who spent hours in the operating room to save her child.

“Hannah was brought into the emergency room with a very severe scalp degloving injury that went all the way down to the skull and had divided her scalp area into two flaps,”” Dr. Funicello said. “She had a lot of bleeding. We were able to resuscitate her, get her into surgery where I reconstructed and placed back her scalp. By an act of God, the reconstructed areas took and she did not require xenografts, which could have prevented her hair from ever growing back.”

Dr. Funicello says Hannah did well following the surgery, but needed special drains that were unavailable at the time in Hazard to be installed to prevent fluid from building up under her re-attached scalp.

Mrs. Click said Dr. Funicello worked with doctors at UK Healthcare to get Hannah safely transferred and treated. But his care didn’t stop there, she said, explaining that Funicello called several times during Hannah’s surgery at UK and also when she returned home to Knott County to check on the young patient.

“ You don’t find many doctors who are going to call and check up on a patient after they leave the hospital. Most of the time they send you to another hospital and you are forgotten,” Mrs. Click said. “You are just a patient for a moment. But it’s not that way for Dr. Funicello. He would call several times a day just to make sure Hannah was okay, not just how she was healing physically, but how she was doing emotionally.”

Mrs. Click said that shortly after the injury, her daughter asked Dr. Funicello if she would ever be able to brush her hair again. It soon became a non-issue for the girl despite curious stares from other children.

“I explained to her that hair is just an ornament that the Lord puts on our heads. I think she wore a hat one day and then she just went without it and would say, ‘I was in an accident and this is just who I am,” Mrs. Click said, noting that Hannah’s experiences with two close family members who had lost their hair through chemotherapy seemed to give the child a better outlook. “She said, ‘If they can do it, I can do it too.’”

The support and interest shown by Dr. Funicello as Hannah has recovered has also helped, Mrs. Click says.

“She thinks the sun rises and sets in him,” she said. There is no doubt in my mind he was the best surgeon we could have had that night and in the days and months of care that have followed, he has really showed his colors –he’s very sensitive, loving , caring-just an extraordinary doctor.”

From the follow-up visits where Dr. Funicello calmed Hannah’s fears as he gently treated her wounds, to the ice cream sundaes with all the toppings he had waiting for her after her appointment, to the photo of Hannah he keeps on his desk “just to see her smiling face and to be a reminder of why he went into medicine,” Mrs. Click says Dr. Funicello has taken what she considered excellent care to an all new level.

“ We can never say enough good things about him – he has meant the world to us,” she says. “I would never want to have to go through this again, but if I did he is the one I would ask for.”

As Hannah’s hair continues to grow — she now has a cute pixie haircut — Mrs. Click says she has taken the lessons learned from the accident as an opportunity to warn other parents of the unexpected potential dangers children can face while on go-karts and other motorized toys.

“We all blamed ourselves for the accident,” she said. “My daughter would say, ‘if I hadn’t been riding her, this wouldn’t have happened, and I would blame myself for not pulling her hair up before she got on. I prayed about it a lot and told myself, no one is to blame-it was a freak accident.”

Added Mrs. Click: “Now, if I see a child with long hair, I walk over to the parent and tell them about Hannah’s accident and I sometimes show them the pictures. It is very important to me to share our experience. because I want to help prevent another child from ever having to go through something like this.”