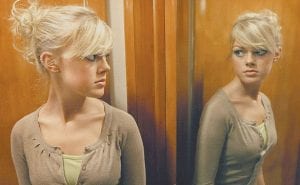 Cheyenne Cawthon, of Quincy, Ill., looks at her reflection in a mirror. Because of her general anxiety disorder and body dysmorphic disorder, what she sees in the mirror does not reflect reality. (AP Photo/The Quincy Herald Whig)

Cheyenne Cawthon has the face of a model and the body of a ballerina.

But when the 17-year-old Quincy girl looks in the mirror, she sees a Plain Jane who’s not pretty like the other girls her age. She weighs just 100 pounds, yet she sees a chubby girl looking back at her.

“Since maybe the eighth grade, I’ve been over-critical of my appearance,” she said.

Cheyenne recognizes that her concerns about her looks are irrational, that she truly is a pretty, petite young woman. Yet she’s been obsessed about covering up her perceived flaws.

“I used to carry a compact mirror with me all the time. If I left it at home, I’d freak out,” she said.

She’s even had anxiety attacks because of this constant worry.

Last year, Cheyenne finally went to her mother, Bobette Cawthon, after reading an article about body dysmorphic disorder in a magazine.

“I remember reading it and thinking, ‘Oh my gosh, that’s me right there,’ ” she said.

Her mother, shocked by the revelation, immediately made an appointment with Dr. Scott Kimber, a family physician affiliated with Quincy Medical Group.

He says body dysmorphic disorder is a medical condition characterized by an excessive preoccupation with real or imagined defects in one’s physical appearance. People with this disorder often have problems controlling negative thoughts about their appearance, even when reassured by others that they look fine.

“People are uncomfortable in their own skin,” Kimber said. “They see themselves as hideous or heinous when their appearance to others is normal.”

He said the most common areas of concern are perceived defects in the skin and facial features.

In adults, the disorder affects men and women in equal frequency, but in adolescence, Kimber says about 90 percent are females.

The disorder causes excessive anxiety and distress, and can lead to depression and social isolation. Some seek numerous unnecessary cosmetic surgeries.

“Studies show the prevalence out there is about 1 percent of the population,” Kimber said. “Often, the patient will suffer in silence until the problem becomes unbearable.”

Cheyenne tells a tale of a girl who spent years in agony.

“It got progressively worse since the eighth grade,” she said. “I would spend hours in front of the mirror. I would change clothes four times before I had to give up. The last year (before the diagnosis), I would tell my mom, ‘I don’t feel good,’ so I wouldn’t have (to go to school and) have the anxiety of how I looked all day.”

Cheyenne worried that her nose was ugly, that her nails looked bad, that her eyebrows weren’t quite right. She would spend hours in the bathroom plucking her eyebrows.

“Everyone else sees this gorgeous girl,” Cawthon said.

Cheyenne also worried about being overweight.

“I’ve had friends say, ‘Why are you so worried about how you look?’ I’ve had girls say, ‘Oh Cheyenne, you’re so skinny.’ They would ask if I had an eating disorder,” she said.

Body dysmorphic disorder is not an eating disorder such as anorexia or bulimia, Kimber said.

“I enjoy eating,” Cheyenne said. “I wouldn’t mind losing a couple pounds, but I’m not going to starve myself to do it.”