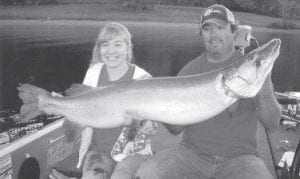 “I saw it come to the boat,” she said. “It went under the boat and then came back out and hit it. It really chomped that bait. If I had a dollar for every time I said ‘Oh, my God,’ I would be rich.”

Terry and her stepfather, Scott Salchli, were fishing the edge of a weed bed near the Claylick Boat Ramp late in the afternoon when the fish struck. Terry caught the record muskie on a Double Cowgirl in-line spinner with two size 10 gold blades and a purple skirt.

The 54-inch fish succumbed as Terry made a figure eight in the water with her lure. Muskellunge that follow a lure but don’t strike often fall for this old trick.

“She did the figure eight perfectly,” Salchli said. “She made really good, wide circles. The fish struck just as she was making her second figure eight.”

The new state record is only the third muskellunge the teen has caught since she started fishing for them last September. “It didn’t fight that long, but was still unbelievable,” she said. “I was running around the boat ramp. I felt like doing jumping jacks. I could’ve run laps around the whole lake.”

Salchli, who works for a soft drink company, also guides anglers for muskellunge on weekends on Cave Run. He is also a member of the Professional Musky Tournament Trail.

“This is the first Sunday I’ve had off in a while,” he said. “This was the only fish we saw all day.”

Terry won the in-line spinner that caught the record at a Muskies Incorporated banquet earlier in the year. The teenager realizes the significance and rarity of her catch. “I’ve been to Muskies Inc. banquets and saw older people who fished for 50 years trying to catch this kind of fish,” Terry said.