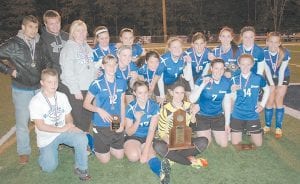 The Letcher Central Lady Cougars soccer team is the 14th Region Champion. The Lady Cougars prevailed over the Estill County Lady Engineers to bring home the championship after a thrilling game in Hazard.

The first half remained scoreless after both teams had near misses on some great opportunities. Brittany Buttrey had the best scoring chance early, chasing down a stray ball near the Estill County goal and firing off a quick shot with a defender half a step behind her. Her shot just barely missed the goal. 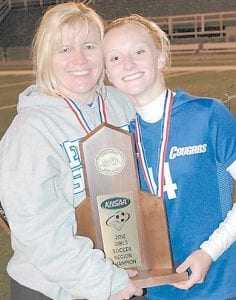 Estill County was unable to break free of the tough Lady Cougars defense, but the Lady Engineers had two great opportunities off of free kicks in the first half. Midway through the first half, the Lady Engineers sailed a ball just over the cross bar from a set piece, and in the closing seconds of the first half Lady Cougars defender Brooke Adams saved a goal when she leaped into the air to head away a shot that would have gone in the net. The two teams ended the half tied 0-0.

Brooke Kincer broke the tie with 10 minutes gone in the second half. A nicely placed shot from a tough angle on the side of the goal put the Lady Cougars up 1-0.

Brittany Buttrey was able to expand the Letcher Central lead with 22 minutes left when she capitalized on an Estill County defender’s misplaced ball. Buttrey took the loose ball, slipped by the last defender and drilled the ball into the back of the net to put the Lady Cougars up 2-0. However, Estill County quickly closed the gap on a quick goal set up by a virtually unstoppable crossing pass.

The Lady Cougars’ goalkeeper, Megan Johnson, made the biggest play of the night. With 10 minutes left, Estill County had a penalty kick. A penalty kick, where the ball is placed a few yards from the goal and the goalkeeper and shooter face each other one on one, is the most nervewracking part of soccer and the easiest way for a goal to be scored.

Johnson kept her cool and was able to guess which way the shooter would aim, dive that direction to block the shot, and then scramble back to her feet to pick up the bouncing ball before any other player could run in and kick the ball into the net. That save, plus another big save with six minutes left on a high floating shot, preserved the win for the Lady Cougars and earned the 14th Region Championship.

With the win, the Lady Cougars advanced into state tournament play.