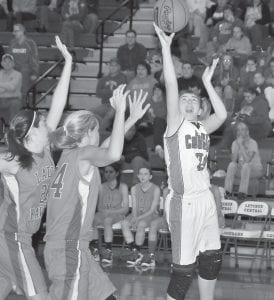 Letcher County Central High School’s Kelah Eldridge drove to the basket during the Lady Cougars’ 69-29 win over Pike County Central on Monday. Eldridge finished the game with 21 points in just 20 minutes of play. She scored 19 points in the first half of the game. (Photo by Chris Anderson)

For the first time since 2007 — the last time Letcher County Central High School won a regional title — the Lady Cougars are back in Dave Cantrell’s state basketball poll in the Lexington Herald- Leader. LCC, with a record of 13-2, is tied with Madison Central for this week’s 25th spot.

Lady Cougars coach Dickie Adams said he has “mixed feelings” about the recognition.

“We’re happy to be ranked even though I feel we have not played as well as I would want,” he said. “We have played well in spots — down in Florida — and poorly at times — like at Knott County last Saturday. We’ve been up and down this season and we need to be more consistent every game.”

Through 15 games, the Lady Cougars are averaging 69 points per game scoring and allowing 42 ppg.

After falling behind early, seniors Erica Meade and Haley Whitaker, along with junior Kelah Eldridge, led the defensive charge that led to the easy win for LCCHS at home on Jan. 9.

“Our full court defensive pressure early in the game was not very good,” said Dickie Adams, “and we let them behind us for too many easy baskets. We went into a half court trapping defense and that made the difference. Our half court defense was very good tonight.”

Kelah Eldridge, who led all scorers with 21 points, hit a trey to give LCCHS the lead for good at 11-8 with 1:53 left in the first quarter. Before the first quarter was over, LCCHS’s defense had forced 10 turnovers and run off 14 unanswered points for an 18-8 lead heading into the second quarter.

The Lady Cougars’ second quarter defense forced an additional 10 turnovers and Eldridge finished the half with 19 of her game-high 21 points.

In the third quarter, LCCHS’s defense shut out the Lady Hawks on just two free throws and a rebound basket by Campbell inside the final 6 seconds as the Lady Cougars extended their lead to 58-20.

For the game, LCCHS forced PCCHS into 34 turnovers and just 8-of-33 (24 percent) field goal shooting.

LCCHS connected on 27-of-61 (44 percent) field goal attempts while dishing out 19 assists but committed 18 turnovers and came up with 20 steals.

Keisha Collins came off the bench to score 12 points and claim 8 rebounds. Erica Meade may have scored just 4 points but she came up with 4 steals and dished off two assists. Haley Whitaker contributed 9 points and 5 assists. Julie Cornett chipped in with 5 points, 7 rebounds and 4 steals. Vannah Breeding added 8 points and 5 rebounds.

The visiting Lady Cougars had to rally in the fourth quarter to win a big district game on the road last Saturday afternoon.

The Lady Patriots, who struggled through their first seven games this season with a 1-6 record, came into this game having won five of their last six. Led by junior guard Paige Slone, the Lady Patriots led 13-9 after the first quarter. Slone, who generated more than half the Lady Patriots’ offense, wound up with 27 points including 4 treys.

Junior Kelah Eldridge’s 7 second- quarter points allowed LCCHS to tie the Lady Patriots 18-18 at the break. Eldridge, who finished with a team-high 19 points, was scoreless in the first quarter but combined with seniors Erica Meade and Haley Whitaker in the second half to key the Lady Cougars’ comeback. Freshman Cheyanne Stidham, who did not play in the first half, contributed 10 points off the bench.

“ We didn’t play very well in the first half, scoring just 18 points,” said LCCHS coach Dickie Adams, “but we came back and scored 40 points in the second half to come away with the win against a talented and experienced Knott County team.”

The Lady Cougars again trailed 38-35 at the end of the third quarter but Whitaker nailed a huge trey to tie the game 45-45 and then made 6-of-8 free throws to hold off KCCHS down the stretch. Whitaker finished with 15 points.

Meade wound up with 9 points, 7 in the second half.

Julie Cornett and Keisha Collins scored two points each and Vannah Breeding wound up with one point for the 12-2 Lady Cougars.