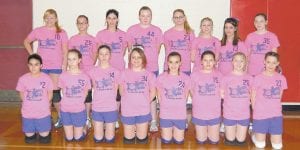 A Letcher County elementary school volleyball team altered its traditional school colors for a worthy cause.

Members of the Fleming- Neon Elementary School volleyball team recently surprised their coach when they collectively decided to incorporate pink into their uniforms to bring attention to breast cancer awareness.

Kimberly Wright, head coach of the volleyball team, said she told the students that she wanted them to join the school’s American Cancer Society’s Relay for Life team.

Teams of people take turns walking around a track until the event is over the next morning. The event raises money to help fight cancer while raising awareness of cancer prevention.

Wright’s request spilled over into the team’s decision to put aside the black shorts and gray shirts with purple writing and instead wear purple shorts and pink shirts.

“When we got the girls together to discuss uniforms, they said ‘Why don’t we wear pink,'” said Wright.

Wright, who was surprised by the idea, said all of the girls ran with the idea and are excited to sport their new uniforms.

“We know some people in our families have this problem so we want to show our support,” said Brittany Sturgill, a member of the volleyball team.

Katlin Johnson, another member of the volleyball team, said it means a lot to her to wear the pink uniforms because her late mother had breast cancer and she has aunts who have breast cancer.

Katlin said the pink uniforms remind her to “always be confident and to have self esteem.”

Since the volleyball team has expressed interest in breast cancer awareness, Wright said she is going to ask a few breast cancer survivors to speak to the girls about their personal experiences battling cancer.

Wright thinks the new uniforms will give the students a chance to tell other students about the importance behind wearing pink.

“The simple fact that they agreed to use this forum is a positive example in my eyes,” said Wright. “These are fifth through eighth graders who are willing to talk about this subject, which will definitely open their eyes and hopefully have them become more aware as they mature.”

Wright said her team is just getting started and there are several ways the team could take their idea to the next level.

“I also feel these girls could participate in some classroom awareness programs about breast cancer, especially after testing is complete,” said Wright.

Wright said other girls in the community may see the benefit of belonging to a team that cares about each other.

The volleyball team will be walking at this year’s Relay for Life on June 5 at the River Park in Whitesburg.

Alberta Perry, chairperson for the Letcher County Relay for Life Committee, said it is great that younger people are starting to put forth an effort to raise money in finding a cure for breast cancer.

“I think it is a wonderful idea that they are getting involved,” said Perry.

The purple cow was a popular fund-raiser last year which raised more than $2,000. Residents and businesses paid money to have Relay for Life Committee members move the cow made of paper and chicken wire from yard to yard.