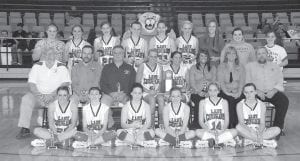 The Letcher County Central Lady Cougars opened their bid for this season’s 53rd District championship with an easy 58-33 first round victory Feb. 23, over Knott County Central in Hindman.

The Lady Cougars, who entered post-season tournament action as the top-ranked team in the 14th Region, followed up their easy win over the Lady Patriots with easy victories over June Buchanan, 65-45, in the semifinals on Feb. 25, and 78-39 over Cordia in Friday night’s district championship.

Coach Dickie Adams will attempt to take a team back to the Sweet Sixteen for the first time in four years, when he took Whitesburg High School to Bowling Green in the final year before consolidation in 2004-05.

In reminiscing after his district championship, coach Adams remembered that team fondly and was quick to say he really likes this edition of Lady Cougars because of their defensive ability.

“The two teams are really hard to compare,” he said, “because that (WHS) team had really good senior leadership and athletic skills. This (LCCHS) team is the best defensive team I’ve had. They have nice balance with post players and perimeter guard players who can make jump shots and we have a good rotation of players.”

In the 53rd District championship, the Lady Cougars used their trademark defensive pressure (forced 30 turnovers and came up with 19 steals) to overcome a bit of a sluggish start, and then rode their balanced scoring attack (seven players with seven points or more and 17 assists) to win going away against the overmatched Lady Lions.

After coming off the bench early, Kelah Eldridge’s four firstquarter treys expanded a 9-7 lead at the 5:23 mark of the opening quarter into a 24-14 advantage by the end of the first quarter. Eldridge finished with a teamhigh 21 points on 8-of-14 shooting — including 5-of-9 from back of the arc.

LCCHS’s relentless full-court defensive pressure forced the Lady Lions into 17 first-half turnovers that resulted in a comfortable 47- 20 lead at the break. LCCHS’s lead grew to 65-30 heading into the final quarter.

The Lady Cougars made 32 of 81 field goal attempts for a very respectable 44 percent, while pulling down 46 rebounds and making just nine turnovers.

For the game, Cordia committed 30 turnovers and made 16-of- 42 field goal attempts for 38 percent and finished with 35 rebounds. The 13-15 Lady Lions were led by May Slone’s gamehigh 22 points and Alyssa Pratt’s 11.

Sexton, with defensive help from Erica Meade, denied Hovee the ball and, when Hovee did get the ball, forced her into 12 of JBS’s 26 turnovers. Sexton limited Hovee to one-of-four shooting before leaving for the bench with 2:16 left to play and LCCHS up 65- 37. Hovee finished with a gamehigh 19 rebounds and also led her team in steals with six.