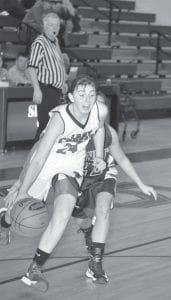 The Letcher County Central Lady Cougars (19-5) are the topranked team in the 14th Region heading into the final week of the regular season.

The Lady Cougars, who are now assured of the top seed in district tournament play, visit Jenkins on Friday night, then play at Owsley County on Saturday afternoon.

Letcher Central will also have an opportunity for revenge against the Shelby Valley Lady ‘Cats (10-4) on February 11. The Lady ‘Cats outlasted LCCS 57-53 in the WYMT Classic at Perry County last month. LCC will close out its regular season against Breathitt County on February 15.

The host Lady Cougars struggled for more than a half with a very deliberate Hazard before finding the range late in the third quarter to break the game open.

LCCHS led 12-5 after the first quarter and 29-18 at the end of the first half after committing 12 turnovers, which allowed Hazard to control the tempo and hang around.

Cheyenne Stidham’s jumper at the 3:25 mark got the LCCHS offense started on an 11-2 run. Over the last three minutes of the third quarter and the first two minutes in the fourth quarter, it rained treys on the Lady ‘Dogs with LCCHS making five straight to pull away from a shocked Hazard. First, Kelah Eldridge from behind the arc, followed by Vannah Breeding and then Cheyanne Stidham and then Eldridge stepped inside the arc and nailed a 17-footer and LCC led 45-27 at the end of three quarters.

For the game, LCCHS shot a blistering 68 percent from the floor making 21/31 field goal attempts — including 7/11 from behind the arc. After making 12 turnovers in the first half, LCCHS finished with 19 turnovers and still won by 24 points.

If there was any lingering doubt about the Lady Cougars after their 50-46 loss at Knott County Central early last month, that doubt was laid to rest in Ermine on January 30 after LCC dismantles the Lady Patriots (12-4) while handing them their first district loss of the season.

With the 22-point victory, the Lady Cougars claim the regular season district championship and the top seed in the 53rd District Tournament later this month in Hindman.

“I liked our win tonight,” said coach Dickie Adams. “I like that we won (another district champion and claimed the number one seed in the district tourney) and I like that we’re continuing to play well.”

The Lady Cougars got off to a fast start, leading 9-2 after Kelah Eldridge’s oldfashioned three point play midway of the first quarter.

After the Lady Patriots closed to within 14-13 with back-to-back baskets to open the second quarter, LCCHS responded with a 9-0 run and never looked back. Senior Vannah Breeding hit a 12-footer and followed that with a trey and then Kelah Eldridge hit a lay-up and Breeding hit another short jumper, and LCCHS had pushed its lead to 12-13 with four minutes left in the first half en route to 27-17 lead at the half.

In the second half, LCCHS dominated the backboards (40-25) and contested every shot and limited KCCHS to 8/47 field goal shooting for 17 percent.

“Cheyanne is beginning to learn that her defensive efforts help her shoot better on the offensive end,” Adams said.

LCC led 42-24 heading into the final quarter. Backto back treys by Kelah Eldridge pushed the Lady Cougars lead to 48-24 with 6:55 left.

With the Lady Cougars up 51-29, Adams cleared his bench.

Three players scored in double figures, led by Kelah Eldridge’s game-high 17 points for the 18-5 Lad Cougars. She also dished out four assists and came up with a pair of steals and three rebounds. Vannah Breeding wound up with 15 points, four rebounds and three assists. Julie Cornett contributed 10 points and eight rebounds and four assists.