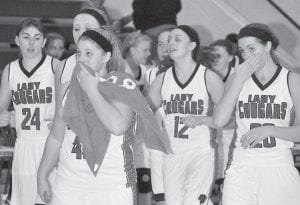 “We’ve had a big surge the last three weeks,” said coach Dickie Adams. “We got together after the Knott County Central loss (January 5) and had a heart-to-heart, and our seniors took it upon themselves to play harder and turn things around. They realized they have a commitment to this program just like I do, and we’re really playing harder now and the results speak for themselves.”

In recognition of their recent surge, the Lady Cougars, now 17- 5, moved into the top spot in the regional standings.

The Knott Central Lady Patriots were scheduled to visit LCC Wednesday night, in a match for the 53rd District’s top seed.

The Lady Cougars have a busy weekend ahead of them, hosting Cordia on Friday night in the first game of a double-header with the boys’ team, then traveling to Leslie County Saturday night. LCC hosts Hazard on February 4 and visits Jenkins on February 8.

The Lady Cougars used a flurry (five-of-seven) of treys in the fourth quarter to turn back visiting Pikeville on Monday night to stay unbeaten (9-0) at home this year.

The Lady Cougars came out and played well for the first quarter and led the Lady Panthers 18-9 heading into the second quarter. After that, the Lady Cougars played without energy or focus and Pikeville closed to within 26- 22 by the half and trailed just 40-39 after three quarters.

With Pikeville’s 2-3 zone limiting the Lady Cougars’ inside game, LCCHS went over the zone to begin the fourth quarter with Kelah Eldridge hitting three straight from behind the arc and a fourth straight after a trey by Courtney Brock before she missed her fifth, and the Lady Cougars lead was 55-44, with 4:03 left to play. A three-point play by Julie Cornett with 2:40 left pushed LCCHS’s lead to 58-44 and Pikeville never recovered.

Eldridge finished with a gamehigh 25 points on 8/18 field goal attempts, including 5/11 from behind the arc. She also claimed five rebounds, dished off four assists and came up with three steals.

Cornett finished with 16 points and six rebounds. Courtney Brock wound up with nine points. Keisha Collins chipped in with four points and a game-high seven rebounds.

In a showdown between the top two teams in the 14th Region, LCC’s defense and Kelah Eldridge’s offense, especially her free throw shooting inside the final minute, carried the host Lady Cougars to an impressive victory over the Lady Commodores.

Coach Dickie Adams provided a very quick and concise summery of the game. “In the second half we handled the press better, took the ball to the basket, played good defense, took care of the basketball and got to the free throw line.”

Eldridge, who finished with a game-high 30 points, scored 14 in the first half as the Lady Cougars struggled offensively, trailing 23-20 at the half. LCCHS made just 6/20 field goal attempts (30 percent) and committed 10 turnovers but stayed in the game by whipping the Lady ‘Dores 22-10 on the boards.

“We were very physical in the paint tonight,” said coach Adams, “especially in the second half, against a very physical team. Julie (Cornett) had 10 rebounds to go along with her 15 points, and she really worked on shutting down (Kayla) Rankin.”

Rankin came into the game averaging 23 points and 12 rebounds. With Keisha Collins helping in the first half and Kristina Bentley helping Cornett in the second half to double team Rankin, the 6’1” junior, second team All-Stater, was limited to 13 points and eight rebounds.

“Julie (Cornett) got physical in the second half and did a really good job, along with Kristina (Bentley),” said coach Adams. Bentley finished with five rebounds and three points and a blocked shot. Collins wound up with four rebounds.

LCCHS came out of intermission with a 6-0 run to take the lead for good. Sophomore Cheyanne Stidham’s layup at the 2:59 mark of the third quarter gave the Lady Cougars a 32-26 lead and Eldridge’s trey with 1:21 left in the third gave LCCHS its first double digit lead at 37-27.

LCCHS led 42-34 to start the last quarter. Perri Coots’s lay-up cut LCCHS’s lead to 44-40, but Cornett’s free throws and lay-up pushed LCCHS back in front, 50-40, with 3:25 left to play. After Randy Carol Napier’s trey cut LCCHS’s margin to 50-44, the Lady Cougars went to the free throw line and sank eight straight — including six by Eldridge and a pair by Vannah Breeding — in the game’s final 49 seconds. With the pressure on, LCCHS converted 10 straight free throws in the last quarter.

“For us to be successful, Kelah (Eldridge) has to handle the ball and get us into our offense,” said coach Adams, “and tonight she did what she’s supposed to do — to get the ball and get to the free throw line.” Eldridge was in the ‘zone’, making 8/12 from the floor — including 3/6 from behind the arc — and 11/12 free throws. She also claimed four rebounds and four assists.

LCCHS made only four turnovers in the second half and finished with 18/43 from the floor for 42 percent and hammered PCCHS 39-22 on the ‘boards. PCCHS wound up making 17/48 (35 percent) field goal attempts and was guilty of 10 turnovers.

Sophomore Courtney Brock came off of the bench to score six points for the 16-5 Lady Cougars. Vannah Breeding and Cheyanne Stidham finished with two points each. Whitney Back scored 13 points for 9-8 Perry Central.