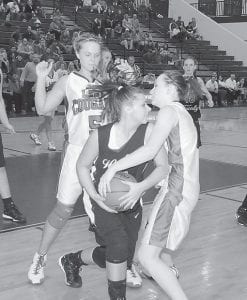 LET’S GET PHYSICAL — Letcher Central’s Erica Meade fought for possession of the ball after teammate Sharaye Kincer’s pick turned Harlan County’s Kendra Russell around on her drive to the goal. (Photo by Chris Anderson)

With the season now just past the halfway point, the 14-4 Lady Cougars have established themselves as serious contenders for both a district and regional championship this season.

Coach Dickie Adams and his longtime staff of assistants used last year’s young and inexperienced squad as a springboard to this season’s successes, but untapped potential remains. And, with just two seniors and two juniors on this year’s team, the program appears to be solid for the next four to five years.

However, the Lady Cougars’ time is now and not tomorrow or next week or next month and certainly not next year. This year’s team is still growing and improving and has something to prove. The immediate road this team will travel is full of dangerous curves and potholes starting with Thursday night’s visit to dangerous Shelby Valley and followed by Corbin’s visit to Ermine on Saturday night.

While both Shelby Valley and Corbin are not quite as good as last year’s teams, both are very capable of getting on a late season roll and contending for their regional championships.

Shelby Valley defeated LCCHS at home last season and won the All A regional title before losing to Johnson Central in the regional tourney last March. The Lady ‘Cats (9-6) returned four starters from last year, led by seniors Laura Perkins and Kayla Cantrell, to help them handle LCCHS’s game-controlling defensive pressure. LCCHS’s depth and rebounding will be the difference in this match-up.

“We know Shelby Valley’s a solid program and a solid team they’re well coached,” said Adams, “and we know they’ll be ready to play us and we had better be ready to play, too.”

Shelby Valley, along with Betsy Layne and Phelps — two teams the Lady Cougars beat earlier this season — are very capable of challenging Johnson Central and Paintsville for the regional title this March.

Corbin (11-7), which lost three starters from last year and is in the same district with defending regional champion South Laurel, has played a very competitive schedule this year and still appears to be still trying to get everything to come together.

“We expect this to be another physical game,” said Adams, “because that’s the way they play in the 13th.”

The visiting Lady Cougars jumped to an early 22- 8 lead but then hit a wall offensively in the second and third quarters before staging a huge rally at the end to remain unbeaten in district play last Saturday night.

LCCHS used the inside/ outside scoring of forwards Sharaye Kincer and Shannon Bays (six points each) and a pair of treys from Kelah Eldridge to run out to a commanding 22-8 lead by the end of the first quarter.

After the early lead, the Lady Patriots got up off the mat and cut LCCHS’s lead to 27-23 by the half. LCCHS did not score a field goal in the second quarter and managed only five-of-12 from the charity line.

LCCHS’s scoring problems continued in the third quarter and the Lady Cougars fell behind 43-38 heading into the final quarter.

Kelah Eldridge’s gamehigh 17 points led LCCHS. The eighth-grader hit fiveof six free throws down the stretch with the game on the line. Erica Meade also had a big game with 7 points late.

With three players taller than 5-11, the Lady Black Bears just out-muscled LCCHS in taking an 8-0 lead by the 4:37 mark. The Lady Cougars regrouped behind senior forward Tierra Baker’s rugged play and scored the next 10 points. Baker’s 18-footer as the opening quarter ended gave LCCHS its first lead of the night.

Baker’s trey near the end of the first half pushed LCCHS to a 21-14 halftime lead and then freshman guard Haley Whitaker then took over with steady guard play and exceptional defensive pressure that disrupted and limited Harlan County’s guards in getting the ball up the floor and in making entry passes to their big players in the paint.