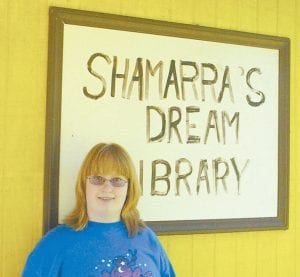 DREAM LIBRARY – The wish of Grayson Shamarra Holbrook of Deane, to have a room full of books has come true with Shamarra’s Dream Library.

I’m reminded of the old saying, “Be careful what you wish for; you just might get it”. Grayson Shamarra Holbrook of Deane is a shy 13-year-old eighth grader who attends West Whitesburg Elementary School. As an 8-year-old she expressed to her family that she had always had a dream that she could have a room full of books. Her family was impressed and elated that a young child could have such mature thoughts. “Out of the mouths of babes come words of wisdom.”

Her mother, Sharon, and grandmother, Shirley Sexton, began putting together ideas to make this dream become a reality. They had a small building framed in their backyard then Grayson’s father, Marty Holbrook III, did the finish work. Grayson wanted the building painted yellow with green trim and that’s exactly what she got. Because Grayson Shamarra Holbrook was the impetus for the project, it was only natural that the library be named Shamarra’s Dream Library in her honor.

The project began operating on a shoestring with the first books donated by Grayson. She had about a dozen baby books which she had outgrown and she wanted to share them with other kids. When friends and neighbors learned about the project, book donations began coming in.

“I get most of the books at yard sales” said her grandmother, Shirley Sexton. “The collection has grown to approximately 3,000 books but only about 2,000 have been catalogued and shelved. We are running out of space and shelving.”

Grayson learned library skills from her grandmother, who is a retired schoolteacher; Shirley taught language arts at Beckham Bates Elementary School at Colson. Each book is assigned three cards which are put into a file alphabetically: 1) by author’s last name, 2) by title and 3) by subject. Each book than gets a pocket with a card for the name of the person who checks it out and the date. A number is then printed on the spine of the book and the book is put on the shelf in some sort of numerical sequence. This helps the patron or the librarian find the book or return it to the appropriate shelf location.

Not only is Grayson an avid reader, she is also a writer. At age 6 she wrote her first book and her grandmother did the illustrations. The book is titled Plate Head’s Fish. In the story a little boy named Plate Head whose nick name is PH went fishing. He caught a fish and took it home and fried it. He ate too much and had to go to the hospital with the bellyache. It wasn’t the fish that gave him the bellyache however, it was the side dishes. He ate the fish with “ketchup, mustard, tomatoes, lettuce, grapes, strawberries, eggs, apple juice, pineapples, bread, ham, blackberries and candy for dessert”. Hummm!

Grayson has also written two sequels with Plate Head as the main character: Plate Head’s Birthday Party and Morning of the First Day of School. Grandma typed the narrative for the first book but Grayson has learned to use the word processor on their computer and now types the stories herself.

Shamarra’s Dream Library has also added other programs to its list of services. A makeshift stage with curtains is set up in the library. Grayson and her friends from church and the neighborhood produce a puppet show with handmade cutouts and pictures. They also do a storybook time to which they invite preschool-age kids. In addition to hearing stories, each child gets to take home a book and a stuffed animal.

When I asked, “What is the next phase of your project?” Grayson replied, “I would like to have more books.”

Currently the library’s hours of operation are Monday evenings and Wednesday evenings or by request.

When I asked Shirley what they need to continue and expand the library services, she replied that they do not accept money. The entire financial burden is borne by the family, but they will accept gifts. They need kiddy chairs and tables, bookshelves, more books, especially children’s books and Western novels. Adults use the library, too. She can also use inexpensive items like card pockets for the books. She will accept any kind of books in good condition. When she receives duplicates, she donates copies to other libraries.

Anyone who would like to donate books or other items can drop them off at the WXKQ radio station on Thornton Hill where Shirley is the hostess of the “Tuesday Morning Round Table” talk show from 10 to 11 a.m. weekly. Anyone who wishes to contribute can call Shirley at 633-2519 and she can tell you what her greatest needs are.

The knack for reading and writing must run in the family. Shirley has written and selfpublished five cookbooks and six books based on the preservation of mountain traditions, customs and dialect. She has also written genealogy books on the John Brown family, the Willard Sexton family and the Holbrook family. She is currently collecting stories about our Indian ancestors. She will put them together in her next book. Anyone who has stories to contribute can call her.

Shirley also organized the 20-mile yard sale in April and October to pull the neighborhoods together from mouth of Sandlick to Camp Branch, through Colson and Deane and from Isom to Colson.

In her backyard Shirley has another building which son-inlaw Marty just finished. It is the beginning of a museum to house traditional household items that mountain families used before they had access to modern conveniences. The museum is named Maggie’s Memories in honor of her 85-year-old neighbor, Maggie Bowen, who donated the first items from her personal collection.

Shirley also works as a substitute schoolteacher in the Letcher County School System. For relaxation she makes crafts in her spare time. You’re kidding me! Spare time?

Grayson’s mom, Sharon, is a former classroom schoolteacher and currently works as a disability coordinator with LKLP. Her dad, Marty, is a state coal mine inspector (electrical specialist).