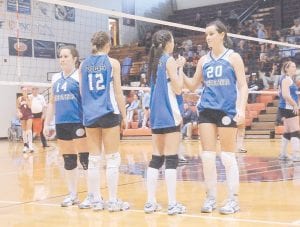 GETTING A BREAK — Letcher Central’s Abby Adams (left) was replaced by Sierra Bates, while Janetta Dixon relieved Myrika Begley during the Lady Cougars’ match against Russell Co. in the state volleyball tournament. (Photo by Chris Anderson)

The Letcher County Central High Schools girls’ volleyball team made it to the Kentucky High School Athletic Association Sweet Sixteen volleyball tournament in Louisville as 14th Region champion, but fell to Russell County from the 16th Region in its first game. The Lady Cougars won the first set of the game, 18-25, but lost the following two, 25-22 and 25-21. It was the fourth straight year the Lady Cougars advanced to the state tournament.

In winning the regional championship, the Lady Cougars defeated Hazard 2-0 and Perry Central 2-0. LCCHS had a record of 29-3 on its way to a fourth consecutive district title and regional title.

Kristen Griffie was selected as most valuable player of the 14th Region tourney. Lady Cougars named to the All 14th Region team are seniors Griffie and Abbie Adams, and juniors Brittany Sexton and Victoria Halcomb. Seniors Kayla Sexton and Katlyn Brown, junior Sierra Bates, sophomore Myrika Begley, and freshman Janetta Dixon and Erica Meade made significant contributions in the matches against Hazard and Perry County. 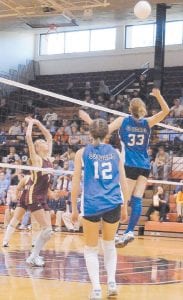 Lady Cougar Sierra Bates watched as teammate Brittany Sexton prepared to spike the ball in the first-set victory against Russell Co. in the state tourney. (Photo by Chris Anderson)