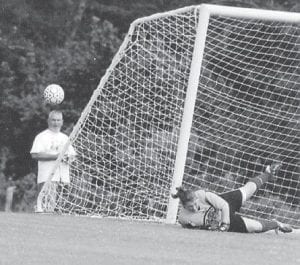 After outshooting Letcher County Central 35-8 at LCCHS recently, the Lady Patriot soccer team and coach Erika Cole should have been all smiles.

So why weren’t they smiling post-game?

The answer, Lincoln didn’t win. Instead, Lincoln let a 2-0 lead slip away, allowing the Lady Cougars to claw their way back and force a 2-2 deadlock.

“I think they (the Lady Patriots) had it in their mindset of what they thought their team (Letcher) was going to be like, and I think if affected them,” said Cole. “I think they thought we would have it easy after getting a 2-0 lead. We got ahead, they got too comfortable and they just shut down.”

Lincoln built the 2-0 edge in the first half. Laura Estridge initiated the scoring in the fourth minute of play, booting in a cross kick from Morgan Reed. In the 25th minute, Reed tallied her own goal, scoring off the assist of Kelsey Smith for a 2-0 halftime lead.

“At halftime, I tried to tell them this is not a cushion,” Cole said. “A 2-0 lead is nothing. We know from the past that you can come back.”

And that’s what the Lady Cougars did.

Although finishing with just eight shots on goal, Letcher County Central made the most of its five second-half shots, scoring off two of the five shots to even the game at 2 all.

Arianna Collins scored both Lady Cougar goals, getting her first score in the 60th minute then knotting the game with her second in the 76th minute.

“Letcher County wanted it,” said Cole. “They wanted the win so they came back in a fierce way. They were playing mainly defense the first half but they changed their mindset in the second half. They were like, ‘OK, we need to play offensively.’ Then I thought we were the ones stuck in the defensive mode again.

“I don’t think we even started playing again (in the second half) until the last five minutes. Then it was too late,” she said. “They were just hungrier for the win today than us, I guess.”

Reprinted from The Interior Journal in Lincoln County.