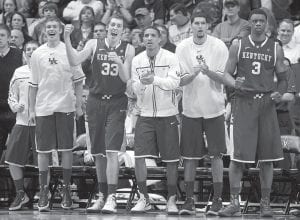 Kentucky players, including Kyle Wiltjer (33) and Terrence Jones (3), celebrated a play against Vanderbilt in the second half of their game in Nashville. Kentucky won 69-63. (AP Photo/Mark Humphrey)

The 25th ranked Letcher County Central Lady Cougars, 22-4, hope to have starters Julie Cornett and Vannah Breeding back in uniform by next week’s district tournament. Breeding has been out of action since early January, while Cornett has been sidelined for the past week.

Beginning next Monday evening, the Jenkins High School Lady Cavaliers will host this season’s 53rd District Tournament. The Lady Cougars, the top seed, will take on fourth seed Cordia on Monday at 6 p.m.

The girls’ district championship will be on Friday evening (Feb. 24) with the tip-off scheduled for 7 p.m.

LCC, which has been without junior forward Vannah Breeding for nearly five weeks, used a very effective perimeter game to de- feat the Lady Cavs. Guards Kelah Eldridge, Haley Whitaker and Cheyanne Stidham combined to score 54 of the team’s 68 points.

The Lady Cavs refused to quit and stayed competitive behind the scoring of eighth-grader Whitney Creech and senior Kayla Stambaugh. Creech finished with a game-high tying 21 points and Stambaugh wound up with 13 points.

With senior guard Erica Meade leading both the defensive and offensive charge, the Lady Cougars ran out to a commanding 22-2 lead by the end of the first quarter. LCCHS, 20-4, expanded their margin to 38-17 at the half and led 56- 20 after three quarters.

Keisha Collins and Kelly Adams wound up with two points each.