Girls keep battling back from injuries 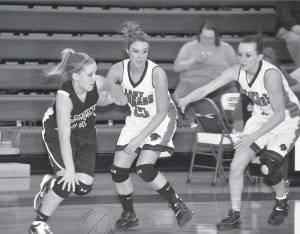 Letcher County Central Lady Cougars Haley Whitaker and Erica Meade teamed up to defend the Knott Central offense in the Lady Cougars’ win over the Lady Patriots, 49-46, on Sunday. The Lady Cougars followed up the district win with another on Monday, defeating June Buchanan, 79-33, to improve to 12-8 on the season and 8-2 in the district. (Photo by Chris Anderson)

The Letcher County Central Lady Cougars, despite losing several key players to injuries over the past few weeks, have continued to battle hard and have posted a 4-2 record since losing leading scorer Kelah Eldridge back on Jan. 10.

The Lady Cougars came up with a huge district win over visiting Knott County Central this past Sunday, Jan. 30, to raise their record to 10-8.

The Lady Cougars can claim the second seed in the 53rd District tournament by defeating visiting Cordia this Friday night in the first half of the girl/boy Senior Night doubleheader.

LCCHS, after playing only one home game in December, will finish out its final four regular season games at home — beginning with Cordia on Friday night followed by Estill County on Saturday afternoon. Tipoff is at 2:30 p.m.

The Lady Cougars continue this week to be the second-ranked team in the 14th Region behind the top- ranked Perry County Central Lady Commodores. The 17-3 Lady ‘Dores are ranked 10th in this week’s Dave Cantrall statewide poll.

The Jenkins Lady Cavaliers will host the 14th Region tournament, beginning the first week of March.

The host Lady Cougars gained a measure of revenge with their win this past Sunday afternoon over the Lady Patriots, and LCCHS did it with the help of gimpy-legged sophomore Vannah Breeding and with the solid play on both ends of the floor by junior guard Haley Whitaker.

Breeding, who suffered a left knee injury in the Lady Cougars’ loss at Knott County Central on Jan. 22, has made a surprisingly fast recovery. Despite dragging her leg at times and not having a lot of lateral mobility, Breeding carried LCCHS in the first half until Whitaker could pick up the slack in the second half.

With KCCHS up 8-5 with 1:50 left in the first quarter, Lady Patriots’ sophomore guard Paige Slone picked up her third foul and sat out the rest of the first half.

Slone, who leads the Lady Patriots with an average of nearly 17 points per game, had only one point in the first half. Her first field goal with 2:28 left in the third quarter allowed KCCHS to close to with 32-28 of LCCHS. She had a critical eight more points in the final quarter to finish with a teamhigh 13 points.

KCCHS’s lead was 16-9 with 2:12 left in the second quarter before LCCHS went on an 11-0 run to end the first half and take the lead at 20-16 at the intermission. Breeding got the run started with back-to-back baskets before Erica Meade converted a threepoint play. Breeding and Whitaker finished off the run with back-toback treys.

Sophomore Julie Cornett, shut out until her first points midway of the fourth quarter, put in a layup to give LCCHS at 42-35 lead with 4:05 left to play. Cornett finished with four points and four rebounds.

Inside the final two minutes, KCCHS’s full- court defensive pressure came up with a couple of steals and forced a couple of turnovers to close to within 48-46 with 31 seconds left to play.

Both teams had a chance to win at the end.

Meade, who finished with seven points, missed the front end of the bonus with 16 seconds left.

Whitaker then made the front end of the bonus with three seconds left to ice the win for the Lady Cougars.

Breeding and Whitaker tied for game-high scoring honors with 15 points each. Whitaker also pulled down eight rebounds and dished off four assists. Keisha Collins chipped in with two points and four rebounds.

Thanks to a huge game from “small” forward (5-6) senior Lauren Thomas, LCCHS managed to outrebound KCCHS 34- 26. Thomas finished with six points and a team-high 10 rebounds.

Sasha Pike chipped in with nine points and a game-high 13 rebounds for KCCHS.