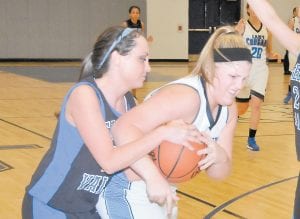 The Letcher County Central Lady Cougars (25-3) have been on a tear since losing 50-46 at Knott County Central in early January. Over the last 13 games, LCC has gone 12-1, with only Friday night’s visit to Breathitt County remaining in the regular season.

Led by a double/double each from seniors Vannah Breeding and Keisha Collins, the host Lady Cougars rallied in the second half to defeat Shelby Valley, the top team in the 15th Region.

LCC trailed 12-7 after the opening quarter but tied the game 13- 13 on Collins’s lay-up off a feed from Julie Cornett. Cheyanne Stidham’s feed to Collins for another lay-up in the final minute of the second quarter gave LCCHS an 18-17 lead at the break. Thanks to a total of 14 assists in the game with Stidham dishing out a gamehigh seven, the Lady Cougars, after shooting just 37 percent in the first half, blistered the nets in the second half, making 13/18 field goal attempts for 72 percent.

“This was a game of two halves,” acknowledged coach Dickie Adams. “In the first half we played good defense but could not run our offense and Shelby Valley had a lot to do with that. In the second half, we calmed down and ran our offense and made some shots.”

A short hook by Julie Cornett pushed LCC’s lead to 24-19 with 4:12 left in the third quarter and Kelah Eldridge’s pair of free throws gave LCCHS a 29-25 lead at the end of three quarters. Shelby Valley’s Sidney Jones’s trey, her only points of the game, tied the game at 33-33 with 6:02 left to play.

Over the next four and a half minutes, the Lady Cougars’ defense limited the Lady ‘Cats offensively and then grabbed every rebound in outscoring Shelby Valley 15-1 to push the lead out to 48- 34 with 1:29 left to play. The Lady ‘Cats could get no closer after that.

In the first half, LCCHS out-rebounded SVHS just 14-11, but the Lady Cougars really dominated in the second half to finish with a 34-18 margin.

Vannah Breeding and Keisha Collins finished with 10 rebounds each. In addition, Breeding scored 11 points and Collins 10.

Coach Adams said he was pleased to get second chance to play an excellent team that had beaten his Lady Cougars five weeks ago in the WYMT Classic. “This game gave us a chance to play an excellent team to judge our progress from when we lost to them. It was an opportunity for me to see the look in our girls’ eyes. It’s important to see our girls wanting to compete and rise to the challenge and not shy away.”

With the victory, their 11th straight, the Lady Cougars not only raised their record to 23-5, but finished their season unbeaten at home. The last Lady Cougar home loss was 13 months ago against Perry County Central.

For the game, LCCHS made 20/37 field goal attempts for 54 percent, while limiting Shelby Valley to 11/40 from the floor for 28 percent.

The visiting Lady Cougars, who are and have been firing on nearly all their offensive cylinders for the past month, won their 10th straight Feb. 9 in Booneville against an overmatched Owsley County.

With the outside duo of senior Vannah Breeding and Kelah Eldridge combining for 45 points, the Lady Cougars jumped out to a commanding first quarter lead and never looked back.

LCCHS led 25-13 after the first quarter, and 44-24 at the half. The Lady Cougars pushed their margin to 66-33 by the end of three quarters, even with Coach Dickie Adams substituting freely.

Freshman Whitney Creech, no stranger to basketball fans in this part of the state, went into the game averaging a gaudy 31.4 points per game.

LCC senior All-Stater Kelah Eldridge, averaging nearly 18 ppg, played just three quarters and finished with a game-high 26 points. Eldridge lit up the scoreboard with her outside shooting; six of her 10 field goals were three-pointers.

LCC led 18-7 after the first quarter, 43-12 at the half, and 61-17 after three quarters. Sidney Yonts scored 12 points for the Lady Cavs and Brittany Sexton added three. Bayle Rose finished with one point.

On rescheduled Senior Night at LCC Feb. 5, the Lady Cougars gave their five seniors a rousing sendoff with the easy win over outmatched Cordia.

Kelah Eldridge, Vannah Breeding, Julie Cornett and Keisha Collins were joined by Emily Blair to start the game, which quickly turned into a route. Eldridge, who came into the game needing just eight points to reach the 2,000 points scored plateau, nailed a trey with 2:31 left in the third quarter to reach the 2,000 mark. She finished with a game-high 13. LCCHS led 25-2 after the first quarter and 48-12 at the half and 72-20 after three quarters.