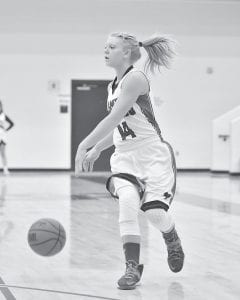 Senior guard Kelli Quillen was photographed in action last week for the Letcher County Central Lady Cougars, who are on a five-game winning streak. (Photo by Brandon Meyer/B. Meyer Images)

The 10-5 LCCHS Lady Cougars are working on a five-game winning streak as they prepare for Thursday night’s visit to Pikeville (8-6).

Since returning from the Beech Holiday Classic, LCCHS has been a different team. “We may have turned the corner,” said coach Dickie Adams, “and we’re starting to do some things really well. We’ve had a different focus in practice and that’s where it all starts.”

The Lady Cougars host June Buchanan School in the first half of a girl/boy doubleheader Jan. 17.

In a showdown Jan. 13 in Ermine, the Lady Cougars, ranked second in the region this week behind Perry County Central, defeat the third-ranked Breathitt County Lady ‘Cats 55-46 and claimed a measure of revenge after faltering late and losing at Breathitt County 63-57 on Dec. 20.

This was a game that LCCHS controlled from the outset. This was also a game that LCCHS could not have won a month ago because the Lady Cougars had to struggle with key players hampered by fouls. With Kristina Bentley and Kelli Quillen unable to play aggressively because of three first-half fouls, LCCHS had to have someone to step up and that’s what junior Kelly Adams did.

Adams finished with five points and five rebounds — including three of four from the charity line in the final minutes.

With Quillen limited by fouls, the offense fell more on Cheyanne Stidham who has been on an offensive wave this month. While Stidham finished with 15 points and a game-high nine assists, she struggled at times and missed shots she normally makes.

Junior Courtney Brock elevated her game. Brock finished with a game-high 17 points, thanks to Stidham’s assists, before fouling out in the final two minutes.

LCCHS used two offensive spurts and a packed-in defense to build a 17-7 lead by the end of the first quarter. With Breathitt County heavily relying on getting the ball down low, LCCHS’s defense forced the Lady ‘Cats into 15 turnovers in the first half and 26 for the game. LCCHS made just 12 turnovers.

In the third quarter, Kayla Gross’s three-point play pulled the Lady ‘Cats to within 37-33 with 1:49 on the clock.

LCCHS led 41-33 going into the final quarter and after BCHS closed to 41-37, Kelli Quillen responded with back-to-back 17-footers for some breathing room.

The Lady Cougars made five of their last six field goal attempts and four-of-six from the charity line.

“This was a big win for us, five in a row,” said coach Adams. “We’ve been playing pretty good. We’re playing good enough and long enough to win.”

Bentley finished with eight points, five rebounds and four steals. Quillen, unable to play her high-energy game, wound up with seven points. Kim Meade finished with one point and five rebounds before fouling out. Sarah Baker added two points, a huge layup at the end.

Kacey Cox led 9-3 BCHS with 14 points but she had seven turnovers and made just 5/12 from the charity line. Allison Herald added 12 points. Carissa Hatton chipped in with eight points and 13 rebounds to help the Lady ‘Cats outrebound LCCHS 37-30.

“We played some excellent defense,” said coach Dickie Adams, “especially in the first half. We can defend but we’re still hurting ourselves with some crazy fouls at times.”

In a little more than two full quarters, Stidham was nearly unstoppable hitting in 10/17 field goal attempts to finish with a game-high 27 points.

The LCCHS defensive pressure forced ERHS into 17 first half turnovers and came up with nine steals.

In addition to Stidham’s offense, senior guard Kelli Quillen provided the team glue with her play. Quillen’s stat line in the first half was six points, three rebounds, three assists and three steals. She finished with 10 points and five assists and four rebounds.

Kristina Bentley and Courtney Brock added seven points each while Kim Meade and Alexis Cornett chipped in with four points each. Kelly Adams, Shelby Hall and Alyssa Adams wound up with two points each. Sarah Baker and Destiny Hall finished with one point each.

The visiting Lady Cougars struggled offensively early but then turned up the defensive pressure and made some shots and came away with an impressive 53- 43 win at Harlan Jan. 9.

“We were down 11-0 and didn’t score until there were just 30 seconds left in the first quarter,” said LCCHS coach Dickie Adams.

Trailing 11-2 entering the second quarter, Cheyanne Stidham, Kim Meade and Kelly Adams picked up the Lady Cougars on the offensive end of the floor as LCCHS closed to within 25-22 at the half and went ahead 36-31 after three quarters.

“ This was a game we thought that we could very well lose due to the fact that Harlan has played well this year and the game was on their home floor,” said Adams.

Stidham, who finished with a team-high 18 points, kept her Lady Cougars in front down the stretch by making 6/7 from the charity line.

“Kelly Adams had her best game of the year for us as she was in double figures scoring,” said Adams. “Kim Meade, Kelli Quillen and Cheyanne Stidham all played well — especially in the second half.”

Courtney Brock finished with five points while Kelli Quillen and Kristina Bentley wound up with two points each.

Jordan Brock’s gamehigh 21 points — including 12/12 from the charity line — led the 10-6 Lady Dragons. Emma Biandi chipped in with eight.

The visiting Lady Cougars used balanced scoring to build a big early advantage in the first half and then coasted for the easy 63-30 district win against the Lady Crusaders in Pippa Passes Jan. 8.

Junior guard Cheyanne Stidham paced the 7-5 Lady Cougars with a game-high 15 points with 12 coming in the first half. Senior Kelli Quillen finished with 12 points and junior Courtney Brock added 10 points.

Kristina Bentley, Cameron Kincer and Alyssa Adams wound up with two points each.