Girls say shot among most painful 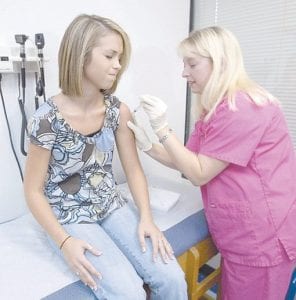 PAINFUL SHOT – Lauren Fant, left, 18, winced recently as she had her third and final application of the HPV vaccine administered by nurse Stephanie Pearson at a doctor’s office in Marietta, Ga. This groundbreaking vaccine that prevents cervical cancer in girls is gaining a reputation as the most painful of childhood shots, health experts say. (AP Photo/John Amis)

The groundbreaking vaccine that prevents cervical cancer in girls is gaining a reputation as the most painful of childhood shots, health experts say.

Health officials have touted the Gardasil vaccine as an important new protection against a cancer causing sexually transmitted virus. In recent months, they’ve also noted reports of pain and fainting from the shot.

During its first year of use, reports of girls fainting from vaccinations climbed, but it’s not clear whether the pain of the cervical cancer vaccine was the reason for the reaction.

“This vaccine stings a lot,” said Patsy Stinchfield, an infectious disease expert at Children’s Hospitals and Clinics of Minnesota, speaking at a recent meeting of vaccination experts in Atlanta.

It sure does, said 18-year-old Lauren Fant. She said other shots tend to hurt only at the moment of the needle stick, and not after the vaccine plunges in.

“It burns,” said the college freshman from Marrietta, Ga.

The pain is short-lived, girls say; many react with little more than a grimace. But some teens say it’s uncomfortable driving with or sleeping on the injected arm for up to a day after getting the shot.

Officials at Merck & Co., which makes the vaccine, acknowledge the sting. They attribute

it partly to the virus-like particles in the shot. Pre-marketing

studies showed more reports of pain from Gardasil than from dummy shots, and patients reported more pain when given shots with more of the particles.

Meanwhile, U.S. health officials have noticed a rise in reports of vaccine-associated fainting in girls. From 2002-2004 there were about 50 reports of fainting; from 2005 until last July, there were about 230. About 180 of those cases followed a shot of Gardasil, which came on the market in 2006.

But it’s not clear that Gardasil’s sting is related to the fainting increase, said Dr. Barbara Slade, an immunization safety specialist at the U.S. Centers for Disease Control and Prevention.

Teens tend to faint from needles, so a three-dose vaccine for adolescents would be expected to prompt some added fainting, she said. Researchers aren’t sure why teens faint more than other age groups, but nervousness may be a factor.

Gardasil is the first vaccine approved specifically to target the human papilloma virus, or HPV, which causes cervical and vaginal cancer. The Food and Drug Administration approved it for girls ages 9 to 26.

Preliminary studies indicate only 10 to 20 percent of them have gotten at least one dose.

But researchers said those rates are due to reasons other than worries about pain, including Gardasil’s $120-a-shot price, limited supplies initially and mixed feelings by some parents and doctors about a vaccination that assumes girls have sex.

“A lot of the older teens are coming in themselves, without a parent. So they themselves are motivated to come back in,” Andrews said.

A second HPV vaccine, GlaxoSmithKline’s Cervarix, is under FDA review and could become available in 2008. Complaints of injection pain have not surfaced in clinical trials, said Liad Diamond, a company spokeswoman.