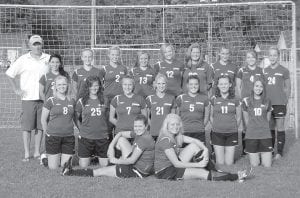 The Letcher County Central High School girls’ soccer team will play their season opener Aug. 17 against Belfry at home, and the team’s coach expects to have a successful season.

“I’m expecting a very good year,” said Greg Collins, head coach of the LCCHS girls’ soccer team. “The girls have been working hard. We should be ready.”

This summer the team has participated in three camps conducted by University of the Cumberlands, Morehead State University and Cameron Fraser, a former Scotland Ranger.

“We are a little behind on the conditioning but will pick up as the season goes on,” said Collins. “We have been concentrating on skills.”

This year’s soccer team looks much different than last year’s team. Six seniors graduated and three more girls are no longer on the team.

“We’ve got several new players this year and they should be a good addition to the team,” said Collins. “The freshmen we have, we are really pleased with them. We should have a good junior varsity team, too.” 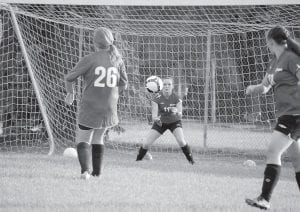 “I think we will do really good and will make it really far this year,” said Goodson.

Debbie Williams, an assistant coach, said the team consists of a good mix of young talent and experience.

The team, whose record last season was 12-5, has won the district tournament the past two years. It lost to Johnson Central in the regional tournament last season.

“I think they have a chance of making a good run in the region,” said Austin Sizemore, an assistant coach.

Soccer started at the high school about six years ago when Fleming-Neon, Letcher and Whitesburg high schools were in the process of consolidating into LCCHS.

“The program has steadily progressed,” said Collins, who is entering his fourth season as head coach. “We went from only winning five games the first year to 12 and 13 games the next two seasons.”

As the team continues to improve, coaches and players want to see more fans come out to their games.

“We would like to have more fans,” said Williams. “These girls work so hard. They deserve more fans.”

The LCCHS dance team is set to perform at halftime of the season opener on Aug.17.

It’s not too late to join the team. Collins said the team still has room for a few more players.

The girls’ soccer team shares the old Whitesburg High School football field with the all-county middle school football team and the LCCHS boys’ soccer team. Part of the weight room located near the field was recently made into a dressing room for the girls’ team.

The vocational school welding class taught by Tommy Collins welded the goals and saved the team a considerable amount of money.