The Letcher County Central Lady Cougars have struggled this season with a very young team and they have taken their licks. They will only improve as the season goes along.

The Lady Cougars were coming off a 47-42 loss at 14th Region foe Knott Central last week, and took on a powerhouse on Monday night as the Pike Central Lady Hawks and their superstar Kayla Lowe came to town. The Lady Hawks were 16-2 and their only loss to a Kentucky team came against 16-3 Rowan County.

Rowan County has an assistant coach that played on the 2002 Whitesburg boys’ team that won the 14th Region. Congratulations, Mr. Chris Tolliver.

Pike Central is the real deal even with the loss to Rowan County. Lowe is the number one free throw shooter in the state. She is averaging 20 points a game and is an All-State candidate. She would not be needed against the young Lady Cougars as the Lady Hawks led 21-9 after one and 34-17 after the break.

It was lights out in the second half as the Lady Hawks rolled 75-42 and placed 11 players in the scoring column. The Lady Cougars got 15 from Brittany Sexton, 11 from Shannon Bays, 9 from Sharaye Kincer, 3 from Morika Begley, 2 from Cloe Wynn, and 2 from Lauren Thomas. Pike Central had over 20 points from the stripe led by Lowe who was 8-8. 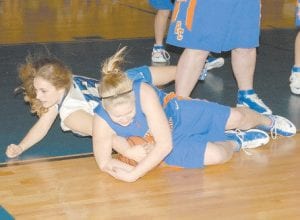 The Cougar boys lost over the weekend to Larue County as they fell 63-52 and saw their record slip to 10-9. As the season starts to wind down, the Cougars have been led in scoring by Charlie Banks with 268 points in 18 games for an average of 14 points and Devon Blair who is also averaging 14 points with 276 points in 19 games. Josh Profitt rounds out the top three with 214 points in 19 games for an 11-point average.

Profitt is one of the state’s best three-point shooters as he has hit 60-125. Profitt is 30-82 and Banks is 10-28. The Cougars are led in free throws by Devon Blair with 44-66 followed by Cole Cornett with 16-23 and Josh Profitt with 14-19. The Cougars are led under the boards by Charlie Banks and Jordon Reynolds with 7 and 5 rebounds respectively.

It has been an up-and-down season for the Cougar boys, but they are really playing better as a team and they can be a factor in the district tournament.