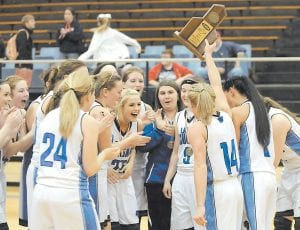 The 21-7 Lady Cougars, the defending 14th Region champions, were scheduled to play highly-regarded Leslie County at the home of the Lady Eagles on Tuesday evening in the opening round of the regional tourney.

The winner of the Letcher Central-Leslie County game will play Powell County Friday for the right to advance to the championship game on Saturday.

In the district championship game last Friday evening at Knott County Central, the Lady Cougars held the Lady Patriots without a field goal in the first half and led by 21 points midway of the third quarter but needed to make 11- of-15 from the charity line in the final four minutes to hang on for the 61-58 victory. 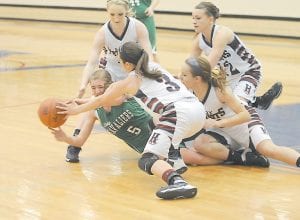 KCC’s first made field goal came at the 7:39 mark of the third quarter but from that point forward, the Lady Patriots turned up their defensive pressure and the Lady Cougars failed, for the most part, to respond to KCCHS’s aggressive play that resulted in their lead being cut to 37-25 by the end of the third quarter.

KCC closed to within 60-58 in the final seconds, but Kelly Adams made one of two free throws and then intercepted the Lady Patriots’ inbound pass to seal LCC’s third straight district crown.

Six players fouled out from both teams and nearly everyone on the floor at the finish was playing with four fouls. The teams combined to shoot 76 free throws. LCC made 30 of 41 while KCC made 23 of 35.

Cheyanne Stidham, who finished with 21 points, was 17 of 21 from the charity line for the game, but was seven for nine over the final four minutes.

The Lady Cougars managed to make just 15 of 53 field goal attempts for 28% and needed a much-welcomed scoring boost from junior guard Sarah Baker. Baker, who came in off the bench when junior guard Cheyanne Stidham left with an injury, made five treys and finished with a gamehigh 15 points.

Letcher Central led 8-7 after the first quarter and 27-35 at the half. After the Lady Cougars had extended their lead to 34-24, midway of the third quarter, JBS then closed to within 40-35 heading into the final quarter. The Lady Crusaders tied the game 40-40 on Jackie Henderson’s jumper, with 5:10 left to play but Kristina Bentley then hit a lay-up, followed by twoof four free throws, and Stidham then made lay-up to push LCC’s lead to 46-40 with 1:15 left to play.

Sloppy passing in the final minute by the Lady Cougars resulted in a pair of steals by Brianna Cox that allowed JBS closed to within 46-44 with 34 seconds left. The game was on the line after the Lady Crusaders rebounded Stidham’s miss on the front end of the bonus.

JBS went to the offensive glass hard in the final seconds to rebound a pair of their missed field goal attempts but nothing went in and LCCHS hung on and advanced.