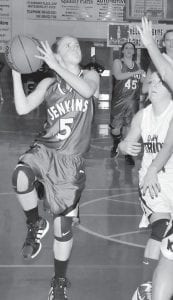 TOP SCORER — Jenkins Lady Cavalier Whitney Creech drove to the basket for two of the 26 points she scored in her team’s opening round loss to Knott Central in the 53rd District Tournament. (Photo by Chris Anderson)

The Lady Cougars will play 55th District champions Breathitt County in the first semifinal game on Friday night at 6:30.

The Lady Bobcats (22-11) defeated Owsley County in Monday night’s other opening round game. They lost twice to the Lady Cougars during the regular season.

In a game that saw Leslie County without freshman scoring ace Katie Moore (20 ppg), Letcher Central’s Kelah Eldridge, Julie Cornett and Erica Meade helped the Lady Cougars jump out to a 14-7 lead by the end of the first quarter. LCC really turned up the full-court defensive pressure in the second quarter while Eldridge scored 11 of her team’s final 14 first half points as the Lady Cougars extended the margin to 38-11 by the break.

Despite sloppy play and six turnovers, Letcher Central extended the margin to 50-14 after three quarters. 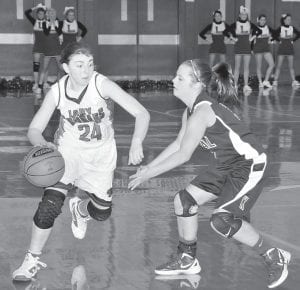 The Lady Cougars, who were unbeaten in the district, were ranked in the state’s Top 25 poll for the final five weeks of the regular season.

The Lady Cougars have only two seniors — Haley Whitaker and Erica Meade – and are rated as a dark horse to unseat No. 4 Perry County Central in this week’s regional. The Lady Cougars and Lady Commodores drew into opposite brackets and are expected to meet Saturday night’s championship.

The Lady Cougars’ use of a surprisingly effective zone defense surprised and disrupted the Lady Patriots, a team that greatly depends upon their perimeter offense, in winning the 53rd District Championship on Feb. 24 at Jenkins High School.

The Lady Cougars’ zone, which adjusted at times into match-ups and unbalanced sets, confused and frustrated the Lady Patriots’ into just 25% field goal shooting in the first half and 27% for the game.

LCC’s zone limited the Lady Patriots’ high-scoring junior guard Paige Slone (23 ppg) to 0-for-8 from behind the arc and five points in the first half. Slone finally hit a pair of treys in the third quarter and finished with a team-high 13 points.

Knott Central had no answer for the Lady Cougars’ inside game as LCC raced to a 16-8 lead by the end of the first quarter and extended the margin to 24-11 by the break.

Julie Cornett and Keisha Collins combined for half the team’s 24 first-half points. Kelah Eldridge had seven points and wound up with a game-high 15 points.

In the third quarter, Cornett’s layup took LCC to its largest lead of the game at 30-14. KCC trailed 35-20 entering the final quarter and closed to within 41-30 on senior Kelsie Jacobs’ leaner with 4:05 left. Whitaker and Erica Meade scored the next four points for a 45-30 lead with 2:18 left and the defending district champion Lady Patriots had to settle for runner-up this season.

Kelsie Jacobs and Regan King finished with seven points each for the 19-11 Lady Patriots.

The Lady Cougars had little trouble in downing the hapless Lady Lions in the semi-finals of the girls’ district tourney last week.