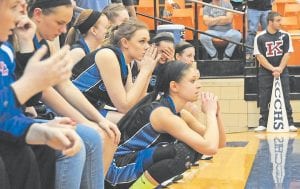 The shorthanded Letcher County Central Lady Cougars battled through injuries to two starters and gutted it out the last two months to cap off an improbable finish on a season by edging Knott Central Sunday for their second 14th Regional title in the past three years and the third championship in school history.

This team has overcome all season, this team has refused to quit, and this team has done what it took to win. After losing senior forward Kim Meade for the season before their 58-56 last second loss at Knott County Central on Jan. 3, the Lady Cougars’ record dropped to 8-7.

While trying to fill the void left by losing Meade, LCC struggled to a 5-3 record over the final two months of a weather-shortened scheduled. To add woe to misery, the Lady Cougars also lost senior forward Kristina Bentley after the Feb. 9 loss at home to Harlan.

However, included in those late season wins were victories over Knott County Central and June Buchanan to clinch the top seed in the 53rd District tournament hosted by LCC. 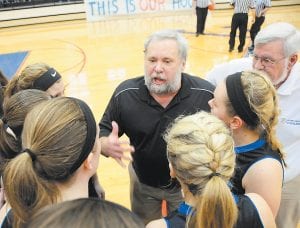 In the opening round of the 14th Region tournament on March 2, LCC struggled offensively in its 52-41 victory over a good Jackson City team. However, the Lady Cougars regained their shooting touch and easily defeated Perry County Central 53-36 in the semifinals on March 6, setting up a fourth game this season with the Knott County Central Lady Patriots, who edged tourney favorite Leslie County, 59-56, and then defeated a good Breathitt County team, 72-65.

For their efforts in the regional tournament, senior Kristina Bentley, Cheyanne Stidham and Kelly Adams were named to the All 14th Region Tournament Team.

The Letcher Central Lady Cougars basketball team and cheerleading squad posed for a photo after defeating Knott Central 47-46 in overtime Sunday to clinch the 14th Region championship. The Lady Cougars will face Johnson Central on Thursday in the opening round of the Girls Sweet 16 state basketball tournament.

The Lady Cougars recovered from an early 5-0 deficit and then used strong defense and rebounding to weather a furious finish to edged Knott County Central 47-46 in overtime, in winning the 14th Region championship on the Lady Patriots’ home court March 8.

A trey by Stacy Stamper and a layup by Jada Higgins gave KCCHS a 5-0 lead less than two minutes into the game. LCC claimed the lead at 6-5 on sophomore guard Shelby Hall’s layup with 3:05 left in the first. Hall, who has played well after starting the last month of the season, injured her knee and left two minutes later.

Senior Courtney Brock picked up her second and third fouls and left just before Hall injured her knee. Brock returned with two minutes gone in the third quarter, but fouled out in the final seconds with two points and two rebounds.

LCC led 8-7 after the first quarter but put together a 7-2 run for a 15-9 lead with 4:53 left in the first half. Cheyanne Stidham, who finished with a game-high 25 points, scored six of the seven points.

With 38 seconds left, Kristina Bentley missed a short left hook and Knott County Central rebounded and held the ball for the final shot. Kristen Waugh then drove the right side, but she was tied up by Kelly Adams and the alternating possession went to LCC under the Lady Patriots’ basket with four seconds left. On the inbounds play, Courtney Brock was fouled hard and then retaliated. She was assessed a technical foul and disqualified with five fouls.

Shelby Hall, who had tried to return late in the fourth quarter but could play only briefly, returned to make 1 of 2 free throws to give LCC a 40-38 lead with four seconds left. Jada Higgins then missed both technical free throws for KCCHS, but the Lady Patriots retained possession and Higgins then drove the right side of the lane and scored to tie the game, forcing the overtime.

As it did near the end of regulation, KCCHS chose to hold the ball for the last shot — this time Stacey Stamper misfired from the right side with four seconds left and Higgins’s offensive stick-back attempt was after time had expired and LCC had won a hard fought regional title, its second in three years and third in the school’s history.

Jada Higgins’s 15 points led the Lady Patriots, who finished the season with a 23-8 record. Kristen Waugh wound up with 12 points. Stacey Stamper finished with nine points and Fallon Slone added four points. Hannah Hollifield, who was scoreless in the first half, finished with five points and a game-high tying nine rebounds.

In addition to her game-high 25 points, which included a blistering 13/14 from the charity line, Cheyanne Stidham also pulled down six rebounds. Kristina Bentley just missed her second straight double-double with 13 points and a game-high tying nine rebounds. Kelly Adams fouled out late in regulation with four points and six rebounds. Shelby Hall finished with three points.

After Tori Watts’s layup gave the Lady Commodores a 2-0 lead in the opening seconds, the Lady Cougars ran off eight straight points and never looked back in downing Perry County Central 53-36 in the 14th Region semifinals in Hindman March 6.

LCC led 11-7 after the first quarter and, after Whitney Evans’s free throw cut the Lady Cougars’ lead to 13-9 with 5:30 to play in the second quarter, LCC ran off 12 straight and pushed its margin to 25-9 with 1:33 left in the first half. Cheyanne Stidham, who finished with a game-high 16 points, scored eight during this run. Stidham also pulled down eight rebounds as the Lady Cougars outrebounded the Lady Commodores 45-38.

LCC led 25-9 at the half and used an 8-0 run midway of the third quarter to extend its margin to 39-22 heading into the final quarter.

Kristina Bentley’s free throw ended a 9-0 run and gave LCC its largest lead of the game at 52-29 with just over two minutes left to play. Bentley finished with a double-double of 11 points and 11 rebounds, two assists and two blocked shots.

The Lady Cougars, now 17-10, placed four players in double figure scoring. In addition to Stidham’s 16 points and Bentley’s 11 points, Courtney Brock broke out of her slump and finished with 11 points, five rebounds and four steals. Kelly Adams chipped in with 10 points, eight rebounds and four assists.

The Lady Commodores finished their season with a 12-14 record and were led in scoring by Rachel Curry’s 11 points. Peri Coots finished with nine points.