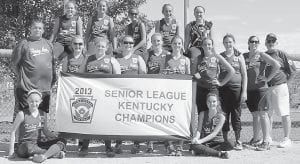 The Fleming-Neon Senior League softball team traveled to London to play in the Kentucky State Championship against Trimble County.

In the first game on Saturday, Trimble County got two on base with a walk and a single by Shelbe Black in the first inning. Grayson Collier then caught a line drive to third and doubled the runner up to end the threat.

In the bottom of the first inning, Cheyenne Stidham reached first on an error, Lexi Stambaugh singled, followed by a single by Charity Niece to load the bases. Caitlynn Estevez was then hit by a pitch to score Stidham and give F-N the 1-0 lead.

In the third, the Trimbles Jamie Smith received a walk, moved to second on a passed ball and scored on a single from Becky Brown to tie the game up 1-1.

In the bottom of the third, Lexi Stambaugh singled and Charity Niece tripled to score Stambaugh. Caitlynn Estevez singled to score Niece and make the score 3-1.

In the fourth, Trimble got a runner on with a walk and F-N made a throwing error to score Ambee Cissell that cut the lead to 3-2. After the fourth, the teams couldn’t get anything going and the final score was 3-2.

Caitlynn Estevez pitched a two-hit, two-run game, with eight strikeouts for the win. Lexi Stambaugh went 2-3 with a stolen base, and Charity Niece was 2-3 with an RBI and a triple.

In game two of the double elimination tournament, Cheyenne Stidham took the mound for Fleming-Neon. In the first inning Trimble had two to single and move around. Aleesha Proctor then scored on a passed ball to take the 1-0 lead.

In the bottom half, Cheyenne Stidham led off with a single, and Whitney Creech had a bunt single to move Stidham over to third. Charity Niece singled in Stidham, and Melissa Bartley drove in two runs, scoring Creech and Niece and taking a 3-1 lead.

In the third, Whitney Creech had a bunt single and scored on a right field double from Lexi Stambaugh for a 4-1 lead.

In the fourth, F-N loaded up the bases, Taylor Johnson was hit by a pitch, Whitney Creech singled and Lexi Stambaugh reached base with a walk, but they could not get anyone across.

In the fifth inning, Kate Staples singled for Trimble. Shelbe Black reached base on an error, and Ambee Cissell doubled to score Staples. Black scored on a passed ball to cut the lead to 4-3.

In the fifth inning, Caitlynn Estevez hit a double off the centerfield fence, and Kaitlynn Whitaker singled her in. Whitaker reached second, and Rachel Spangler came in as pinch runner. McKenzie Gibson had a sacrifice to move Spangler to third, but couldn’t get her in.

In the sixth inning, Whitney Creech made the score 6-3 with a solo homerun to right field. In the seventh, Trimble got runners on second and third, but Cheyenne Stidham struck out Cissell to end the game and win the state championship.

Stidham picked up the win on six hits, three runs, and had 10 strikeouts. Whitney Creech went 4-4 with a homerun.

The Fleming-Neon Senior League Softball team will now travel to South Bend, Ind. to play in the regional tournament.