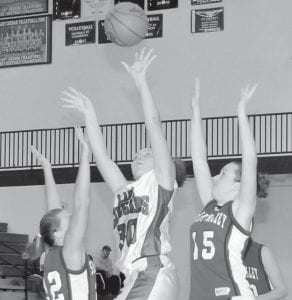 HANDS UP! — Letcher County Central’s Shannon Bays split the Shelby Valley defense to fire up a shot in her 24- point performance, leading the Lady Cougars to a 68-35 win over the Lady Wildcats. (Photo by Chris Anderson)

Over the past eight days, the Letcher County Central High School Lady Cougars have won their own Christmas Classic and the Bourbon/Paris Holiday Classic for a 10-game winning streak that raises their overall record to a 14th Region best 12-1 and should place them among the state’s top ranked teams when new polls are released.

The Lady Cougars were never really tested in winning their fourth consecutive Christmas Classic and posted easy victories over Powell County, Shelby Valley and June Buchanan on Dec. 21, 22 and 23.

The Lady Cougars are spending time in practice this week correcting the shortcomings that were exposed by the recent daily tournament competition. LCCHS opens a three-game home stand beginning Saturday night against Leslie County. Highly regarded Knott County Central comes to LCCHS next Monday evening (Jan. 2) for an important district showdown, followed by Jenkins on Jan. 8.

The Lady Cougars travel to Lexington on Jan. 9 to take on Paul Lawrence Dunbar in the one-day, eight-team Martin Luther King Classic.

In the finals of the Bourbon/ Paris Holiday Classic on Monday night, the Lady Cougars rallied down the stretch behind senior Shannon Bays’ inside scoring and some excellent free throw shooting to out-last Somerset for the championship.

Somerset sealed their own fate by converting just four-of-10 free throws down the stretch. Marie Thomas’ 16 points led 10-2 Somerset and Jessica Coffey added 15 points — but she missed four straight free throws with the game on the line.

Kelah Eldridge finished with 16 points and her outside shooting through the first three quarters (four treys) kept LCCHS close.

In this nip-and-tuck nail-bitter, the perimeter oriented Lady Briar Jumpers led 13-10 after the opening quarter but there after the teams swapped leads as often as they swapped baskets. The teams were tied 27-27 at the half and 43- 43 after three quarters.

In the fourth quarter, the Lady Cougars took control by pounding the ball inside to Bays and Somerset had no defensive answer.

In their third-round game on Sunday night (Dec. 27), Shannon Bays and Julie Cornett combined to score half the Lady Cougars’ points and LCCHS opened a bit first-half lead and never let up in downing Whitley County.

LCCHS led just 14-12 at the end of the opening quarter, but Cornett came off the bench to give LCCHS some instant offense by scoring eight of her 10 total points to lead the Lady Cougars to a comfortable 33-16 half time lead.

It wasn’t pretty with the struggling Lady Cougars having to hit timely free throws down the stretch to turn back up-set minded 3- 8 Pendleton County in their second-round game on Sunday afternoon.

Julie Cornett came off the bench early to score all 10 of her points in the first quarter as LCCHS led the Lady Polar Bears just 16-10 after the first quarter. LCCHS appeared to be taking control after pushing their advantage to 29-16 at the half. However, Pendleton County, behind Susan Pugh’s nine thirdquarter points and seven by Terri Black, took advantage of LCCHS’ shooting woes and closed to within 41-37 heading into the final quarter. Black finished with 15 points and Pugh wound up with 13.

Down the stretch, LCCHS’ defense limited Pugh to a single trey and guard Kelah Eldridge nailed six straight free throws, and a huge trey, to help LCCHS hang on. As a team, LCCHS converted 10-of-13 from the charity line in the second half.

Eldridge made seven-ofeight second half free throws a pair of treys in leading LCCHS with a game-high 17 points.

The Lady Cougars used early defensive pressure and a balanced scoring attack to down Ballard Memorial in the opening round of the Bourbon/Paris Holiday Classic on Saturday (Dec. 26).

LCCHS, with six players scoring nine or more points, expanded a 16-14 first quarter lead to 45-31 by the half and then pushed their margin to 62-42 after three quarters and then turned the game over to their bench.

Shannon Bays, who was tenacious on both ends of the floor, led LCCHS with 16 points while Brittany Sexton and Kelah Eldridge added 13 points each. Haley Whitaker and super-sub, Julie Cornett, chipped in with 10 points each. Erica Meade finished with nine points. Micca Boggs added four points and Lauren Thomas finished with two points.

Forward Abby Shelley scored 12 of her game-high 22 points in the fourth quarter for 10-3 Ballard Memorial after the game was no longer in doubt.

LCCHS’ defensive pressure limited All-State Mariss Hovee to six first half points in the easy victory over the Lady Crusaders in the final round of the Lady Cougars Christmas Classic on Dec. 23.

Hovee, a 5-4 senior who averages 24 points per game and 17 rebounds, finished with a game-high 24 points and 15 rebounds. LCCHS out-rebounded JBS 53-41 while forcing 33 turnovers and claiming 25 steals.

LCCHS struggled nearly all the first quarter and led only 13-12 on Haley Whitaker’s steal and lay-up in the final second. Whitaker finished with a team-high 19 points, five rebounds and five steals and four assists.

LCCHS’ 7-0 run to open the second quarter pushed the Lady Cougars to a conformable 37-18 half time margin and then coasted in the second half.

Kelah Eldridge finished with 13 points and Julie Cornett with 12. Shannon Bays and Brittany Sexton chipped in with 10 points each. Bays pulled down a team-high 13 rebounds and Sexton added eight.

LCCHS led 17-10 after the opening quarter and 34- 21 at the half and then used defense to break the game open in the third quarter. LCCHS led 50-26 heading into the final period.

Shannon Bays led all scorers with 22 points and five rebounds. Kelah Eldridge chipped in with 13 points and six assists and four rebounds. Haley Whitaker had five assists and scored eight points while Brittany Sexton and Julie Cornett finished with six points each.

LCCHS, behind the offense of Brittany Sexton and Kelah Eldridge, roared out to an 11-0 run in defeating the Lady Pirates in the opening round of the Lady Cougars Christmas Classic on Dec. 21.

Eldridge, who scored seven of LCCHS’ first 11 points, finished with 22 points and four assists while Sexton recorded gamehighs of 24 points and eight rebounds.

Powell County refused to quit and trailed just 18-14 after the first quarter and 39-28 at the half. After Powell County closed to within 45-39 midway of the third quarter, Sexton took over and scored on three straight jumpers and LCCHS pushed their advantage to 57-43 heading into the final quarter and Powell County could get no closer.

The Lady Cougars’ defense forced the Lady Pirates into 22 turnovers while committing 17 themselves.

Julie Cornett came off the bench to bail out LCCHS’ foul-plagued front court with 10 points and seven rebounds.