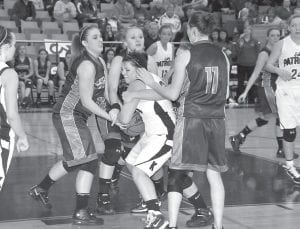 The Letcher Central defense pounces on Knott County Central forward Kelsie Jacobs, but can’t come away with the ball in the championship game of the girls’ 53rd District Tournament last week at Hindman. The Lady Cougars were beaten handily in the game, falling to the Lady Patriots 50-42, after having won the district the past two seasons. Pictured for the Lady Cougars are Lauren Thomas, Keisha Collins, Vannah Breeding, Erica Meade and Haley Whitaker. (Photo by Chris Anderson)

The Lady Cougars rallied from an 18-13 deficit late in the second quarter to pull away from Estill County in the opening round of the 14th Region tournament Monday night, Feb. 28, at Jenkins High School.

LCCHS’s offensive woes and turnovers continued for much of the first half with Estill County, a team that lost 82-42 at LCCHS on Feb. 5, leading the Lady Cougars 11-7 after the first quarter.

Cassidy Flynn’s three-point play with 3:33 left in the second quarter extended the Lady Engineers’ lead to 18-13. LCCHS then picked up its defensive pressure and rebounding and went on an 11-1 run to finish the first half and take a 24-19 lead at the break. Flynn finished with 13 points.

After LCCHS came out flat to start the third quarter, Chelsea Alexander’s trey and Sylena Neal’s free throw pulled Estill County to within 26-25 with 3:40 left in the third quarter. Alexander finished with a team-high 14 points and Neal wound up with two points for the 17-12 Lady Engineers, the champions of the 56th dDistrict.

Again, LCCHS responded — this time with an 8-2 run to close the quarter. Vannah Breeding’s two baskets in the final minute allowed the Lady Cougars to take a 34-27 lead into the fourth quarter. Breeding, who had 3 points in the first half, wound up with a gamehigh 14 points.

Haley Whitaker, who picked up her second foul with just 3 minutes gone in the game, stayed on the floor and kept LCCHS in the game in the first half with 9 points. She finished with 13.