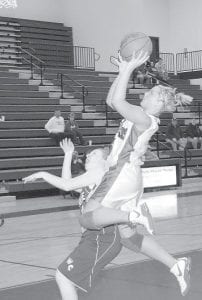 HOME FINALE — In her final home game as a Lady Cougar, Sharaye Kincer flew in for a layup during her team’s win over Wolfe County last week. (Photo by Chris Anderson)

The Letcher County Central Lady Cougars, led by their “Edith Bunker” defensive pressure, stifled Knott County Central into 34 turnovers (which included 25 steals) in easily downing the Lady Patriots 58-33 on their home floor Monday evening in the opening round of the girls’ 53rd District Tournament.

“It’s always tough to play on the road in someone else’s gym and it was great to win that first district game,” said coach Dickie Adams. “We beat a team tonight that always plays tough on their home floor. We beat them by just nine (58-49) over here a couple of weeks ago and we had to come from behind to do it so this was a great win.”

The 24-4 Lady Cougars will take on 15-10 June Buchanan in the semifinals tonight (Wednesday). The championship game is scheduled for Friday night at 7 p.m. in Hindman. The girls’ 14th Region Tournament gets underway next week at Hazard High School’s Memorial Gym.

Led by perhaps its three most dialed-in players right now, senior Sharaye Kincer, junior Brittany Sexton and freshman Haley Whitaker, LCCHS ran off the first 10 points of the game. Sexton scored a game-high 17 points — 15 coming in the second half — and pulled down a game-high nine rebounds. Kincer scored 15 points while dishing out four assists and claiming five rebounds and three steals. Whitaker ran the offense and finished with 13 points while coming up with five steals.

“Our balanced scoring has been our trademark all year,” said coach Adams in recognition of three players in double figure scoring. “We’re much better at getting the ball to the right people at the right time now.”

“When they started four guards, we knew we could get mismatches offensively on our end of the floor in the post with Brittany (Sexton) and Sharaye (Kincer),” said coach Adams. “We played hard and had some success but we didn’t play as good as we can.”

If KCCHS had any visions of a second-half comeback, freshman guard Erica Meade’s defensive pressure soon dissuaded the Lady Patriots. Meade, who had just two points, collected four of LCCHS’s 10 first-half steals and seven steals overall. Her steals led to five assists with three of those coming early in the third quarter as the Lady Cougars continued to control the Lady Patriots.

“Our press really hurt them,” said coach Adams, “and Erica is a teriffic defender off the ball and she just does so much for us.”

LCCHS led 46-22 at the end of the third quarter and 58-33 when the subs came in with almost two minutes left to play.