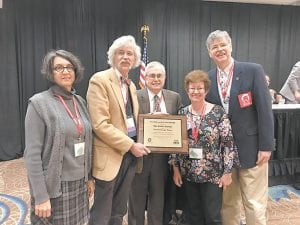 Art Cullen (second from left) and brother John (right) held the family’s Gish Award after they and their wives received it from Al Cross, director of the University of Kentucky-based Institute for Rural Journalism and Community Issues.

The Cullen family of northwest Iowa was presented earlier this month with the 2017 Tom and Pat Gish Award for courage, integrity and tenacity in rural journalism earlier this month at the Iowa Newspaper Association convention. The award is named for the couple that published The Mountain Eagle in Whitesburg for more than 50 years and is presented by the University of Kentucky-based Institute for Rural Journalism and Community Issues.

The Cullen family publishes The Storm Lake Times, a twice-weekly newspaper that has focused attention on water-pollution issues in Iowa, often to the dislike of agribusiness interests that are sources of much of the pollution.

“We’ve lost some friends, we’ve lost subscriptions; for a while, lost some ads,” said Art Cullen, editor and co-owner of the paper started by his brother John more than 27 years ago. This year Art Cullen won the Pulitzer Prize for editorial writing for a series of columns about pollution in the Raccoon River, which supplies water for Iowa’s capital and largest city, Des Moines. He and his son Tom also wrote many news stories about the issue.

“We have bragged plenty about winning the Pulitzer Prize for editorial writing. This month, The Storm Lake Times was presented another prestigious honor that has no less meaning to us: The Tom and Pat Gish Award from the Institute for Rural Journalism and Community Issues at the University of Kentucky,” Art Cullen wrote in a column after receiving the award.

Following their reporting, the Des Moines Water Works sued drainage districts of Buena Vista, Calhoun and Sac counties for failing to stop the pollution. The Times forced the release of public records that showed major agribusiness interests were paying for the suit’s defense. Courts ruled the districts couldn’t be sued, but the suit and the Pulitzer Prize focused more attention on the issue. Art Cullen says “The terms of the debate are changing,” and the amount of farmland in cover crops that prevent pollution has doubled in the past year.

Cullen’s Pulitzer-winning columns had punch. He wrote in March 2016, “Anyone with eyes and a nose knows in his gut that Iowa has the dirtiest surface water in America. It is choking the waterworks and the Gulf of Mexico. It is causing oxygen deprivation in Northwest Iowa glacial lakes. It has caused us to spend millions upon millions trying to clean up Storm Lake, the victim of more than a century of explosive soil erosion.”

The Pulitzer committee said the editorials were “fueled by tenacious reporting, impressive expertise and engaging writing that successfully challenged powerful corporate agricultural interests.” Much of that reporting was done by Tom Cullen. Art’s wife, Dolores, also reports and takes photographs for the paper, and John’s wife, Mary, writes a recipe column. The family dog, Mabel, is there, too.

The Times began reporting and editorializing about pollution from farms about a year after it was established in June 1990, first looking at concentrated hog-farming operations. It has brought to light other environmental concerns, such as the need to dredge Storm Lake, and issues surrounding the livestock processing plants that have brought many immigrants to Buena Vista County, in the heart of socially and politically conservative northwest Iowa.

“The Storm Lake Times has long been known to those of us who follow rural journalism as a great example to emulate, and Art Cullen’s Pulitzer Prize merely confirmed that,” said Al Cross, director of the Institute, based at the University of Kentucky. “We hope this award to the Cullen family will show that they have had high ideals and standards for a very long time.”

Cross noted that the paper is a commercial success, with a circulation of 3,000, more than the 1,700 reported by the thrice-weekly Storm Lake Pilot-Tribune, owned by Rust Communications of Cape Girardeau, Missouri. “ Unlike most weeklies, the Times gets most of its revenue from circulation, with a relatively high $60 annual subscription price,” Cross said. “That is testimony of community support for quality journalism, providing another example to follow.”

The Tom and Pat Gish Award is named for the late couple who began publishing the now 110-year-old Mountain Eagle in 1957. Their son, Eagle Editor-Publisher Ben Gish, is on the award selection committee.

“It is encouraging to know that small, family owned-and-operated community newspapers like The Storm Lake Times and Editor Art Cullen are still here and doing their jobs in very difficult circumstances with the same courage and tenacity exhibited by my parents,” Ben Gish said.

Other winners have been the Ezzell family of The Canadian (Tex.) Record, in 2007; James E. Prince III and the late Stanley Dearman, current and former publishers of The Neshoba Democrat of Philadelphia, Miss., in 2008; Samantha Swindler of The Oregonian in 2010 for her work as editor of the Corbin, Ky., Times-Tribune and managing editor of the Jacksonville (Tex.) Daily Progress; in 2011, Stanley Nelson and the Concordia Sentinel of Ferriday, La.; in 2012, Jonathan and Susan Austin of the Yancey County News in Burnsville, N.C.. in 2014, the late Landon Wills of Kentucky’s McLean County News; in 2015, the Trapp family of the Rio Grande Sun in Española, N.M.; and in 2016, Ivan Foley of the Platte County Landmark in Missouri.