Give a fruitcake they’ll be glad to keep and eat

By MICHELE KAYAL The Associated Press 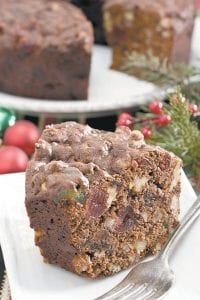 This fruitcake has the right balance of moistness and tasteful ingredients to be one you will not pass on. (AP Photo/Larry Crowe)

Why is fruitcake the grown-up version of coal in your stocking?

“Most of them are just leaden,” says Southern cooking expert Jean Anderson, who wrote the forward to the recently rereleased cookbook “Fruitcake, Heirloom Recipes and Memories of Truman Capote and Cousin Sook” (University of North Carolina Press, 2010).

“My mother made awful ones and she finally just quit, which delighted all of us,” Anderson said. “The reason Southern ones are better is because there’s huge variety.”

It was Marie Rudisill, aunt to the famed Southern author of “Breakfast at Tiffany’s” and “In Cold Blood,” who originally produced the slim volume “Fruitcake” in 2000 by culling numerous variations on the theme from a 19th century family journal. 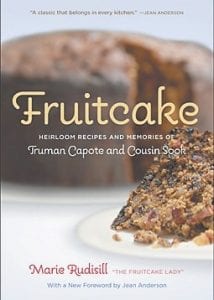 The image at right shows the cover of “Fruitcake,” by Marie Rudisill. (AP Photo/The University of North Carolina Press)

Regardless of the variety, good fruitcake — and yes, there is such a thing — abides by certain rules.

It should be moist, but not wet, Anderson says. It can be hefty, but not brick-like. A good fruitcake also is balanced with a pleasing blend of fruit, nuts and anything else you’re using, says Berta Lou Scott, co-founder of North Carolina based Southern Supreme Fruitcake Company.

Want to make a fruitcake that won’t be regifted? Scott and Rudisill’s book off er these tips:

— Keep it moist.
During baking, rotate the cake every 15 minutes, Scott says, and don’t overcook it. In the book, Rudisill suggests placing a shallow pan of hot water in the oven during baking.

— Choose ingredients wisely.
Hate citron or candied peels? Leave them out. “If you don’t like to eat it, don’t put it in there,” Scott says. Rudisill suggests using a “light” baking flour, such as one made from soft winter wheat. These flours usually are labeled “pastry flour.”

— Be tasteful.
Balance your fruit, nuts and other components. “You can put so much fruit in it that fruit is all you taste,” Scott says.

— Plan ahead.
Make the cakes at least four to six weeks in advance, Rudisill suggests. This gives the flavors plenty of time to develop.

— Drink responsibly.
Rudisill suggests wrapping the cakes in a brandy, wine or juice soaked cloth and moistening it once a week. But Scott warns against a heavy hand with the booze. “If they like their bourbon, I tell them to drink their bourbon with the cake,” Scott says.

— Chill out.
Fruitcakes slice best when refrigerated, Rudisill writes, so make sure the cake is cold when you cut it. Use a straightedged, thin bladed knife and dip it into hot water before cutting with a slow, sawing motion.

In a large bowl, use an electric mixer to cream the shortening and sugar until creamy. Add the eggs, one at a time, beating well between. Stir in the chocolate.

Sift together the flour, baking powder, salt and cinnamon. Add the flour mixture to the egg-sugar mixture in batches, alternating with the milk. Mix well. Stir in the candied fruit, raisins and walnuts.

Use the butter to coat a 10-inch tube pan. Dust the pan with cocoa powder, tapping the pan to remove any excess. Spread the batter into the pan and bake for 1 hour 40 minutes, or until a knife inserted at the center comes out clean. Cool in the pan.