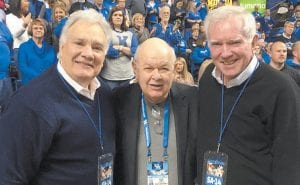 Oscar Combs, center, has been a fixture on the UK sports scene for 40 years, but he announced he no longer will be on the UK Radio Network pregame basketball and football shows. Columnist Larry Vaught pays tribute to Combs, formerly of Perry County, on Page 3. (Photo by Gary Moyers)

I’ve told you before what a big John Calipari fan that former UK All-American Jack Givens is. But I think it is rare for a player as good as Givens was to understand what the arrival of Calipari meant to Kentucky fans after two years of Billy Gillispie.

“He took the game and gave it back to the fans. Think back right before he came here and back to Billy Gillispie. For the Kentucky fans, the Big Blue Nation was feeling left out and under appreciated. They didn’t like the direction the program was going and the program was in really bad shape,” Givens said.

“Calipari came in and got that being the basketball coach at Kentucky, coaching is a small part of the job and it is more important for you understand the program is bigger than the campus. It goes everywhere. Coach Calipari kind of got that right from the beginning.”

Givens used a postgame radio show Calipari does in Rupp Arena as a way to explain that.

“After a game we (fans) sit there and have evaluated everything, and now have a drive to get home and yet I am going to stay another 40 minutes just to hear Calipari talk for 10 minutes,” Givens said. “Probably 8,000 to 10,000 are listening to Cal’s comments and everyone thinks he is just talking to you and all others there just have the privilege to listen it. He can make you feel without your input this team could not win a game.

“I say sometimes he should be a politician, but he’s bigger than a politician. He gave the game back to the fans. It meant so much because we all needed to know the train was back on track and we had a guy that could not only drive the train but he also had us on board.”

Fans will have a chance to meet and greet University of Kentucky football players Saturday at Commonwealth Stadium during Fan Day. My guess is that one of the most popular players will be freshman linebacker Kash Daniel of Paintsville.

He’s also a special football player with unique skills. He won the Paul Hornung Award in Kentucky and was a U.S. Army All-American.

But it is his personality that sets Daniel apart from so many other players and what I think will bring fans to him Saturday.

Just ask quarterback Drew Barker, who should be another fan favorite.

“Kash is awesome. I love him. He is hilarious and one of the funniest people I have ever met,” said Barker. “Coming from Paintsville, he is great. We hang out a lot.”

“Kash was so mad. It was hilarious. This guy is hardcore fan. He was about to cry over someone losing,” Barker said. “He has a lot of passion, which obviously was displayed the night when I was watching that fight. He was yelling at the TV and everything.

“But he translates that to his whole life. He is passionate about everything he does. Having someone like that on your team can only help rally people around him. He will be a great leader and great player for us.”

“At his age, it is just something he enjoys,” Scott Daniel said. “I think when he was little the pageantry of professional wrestling and the hoopla and who is the baddest guy out there appealed to him. He gravitates to that kind of stuff. He likes it a lot. As long as he does not try it, it is okay with me.

“He always loved watching that kind of stuff. When I was young and we got about six channels on TV, I watched. I tell Kash about that he just laughs. Back then my brother and I used to wrestle each other. Remember there’s not a lot to do in eastern Kentucky, so maybe it’s my fault he’s like he is today.”

Former Kentucky defensive lineman Jeremy Jarmon can only laugh at himself now when he thinks about a bet he made — and lost — in high school.

He had played fullback along with the defensive line as a junior. He was mainly a blocker at fullback and got only two or three carries his entire junior season.

“I made a bet with teammates that I would have no fumbles all season. If I fumbled, I said I would wear a dress to school,” Jarmon said. “So what happens. The first week of the season, my first carry of the season, I fumble the ball.”

Jarmon went home and teammates came by to tease him about having to wear the dress.

“My dad overheard the conversation and when he found out I was trying to keep from doing it, he said I needed to man up and needed to do it,” Jarmon said. “So I wore a dress to school, checked into my first period class and then changed into my regular clothes. I did what I was supposed to do. I just didn’t do it for long.”

Receivers coach Lamar Thomas probably has had more offseason fun than any other UK coach. He left Louisville to join Mark Stoops’s staff and consistently has engaged in playful banter — or at least mainly playful — with Louisville fans on Twitter the last few months. It’s that type of swag that Thomas shows that players insist they really like.

“I tell them I really could care less about swag. I like winning. People talk about Miami University when I was there. We liked winning. We worked hard to be as confident as we were,” Thomas said. “If you work hard, be as confident as you want to be. But you have to put that time in. It doesn’t happen over night. If guys put the time in, you can do whatever you want as long as we win. That’s important.

“We have a lot of talent. I was really impressed when I actually got to see them and their attributes. Obviously, we got some fine-tuning to do, but the talent is there. We have young receivers that are big and strong and physical. We have some quick guys that are veterans. It is a good group. We have a lot of guys that are going to be really good. And we are putting the time in, which is important.”

I wanted to know about Dorian Baker, a player who has been consistently inconsistent.

“Every day I can see that young man getting better. When I first got here, I was scratching my head. We sat down and talked, and he kept coming back for more,” Thomas said. “He has not missed anything. He has not shown up late. He is always the first one doing things. He talks more to the guys about doing the right thing. I explained to him what a leader must be. Sometimes you don’t need to talk, you just need to show guys the right way and a lot of guys will follow.”

How good will Kentucky freshman point guard De’Aaron Fox be? Well, John Calipari has compared him to John Wall in some ways because of his blazing speed. But he can also run an offense. He can get to the rim, hit mid-range jumpers or dish to teammates.

He is a better 3-point shooter than Wall was coming into college, but like Wall is at his best in transition.

However, check out what ESPN recruiting analyst Paul Biancardi recently said about Fox. “He is the best perimeter defender coming into the college game and that will enhance his resume. With the departure of Tyler Ulis to the NBA, John Calipari will lean heavily on Fox,” Biancardi said.

That’s high, high praise and combine him with Isaiah Briscoe and UK could have two lockdown perimeter defenders.

Patrick Towles will start his Boston College football career when his team takes on Georgia Tech in Dublin, Ireland, Sept. 3.

Towles left UK after the 2015 season ended after losing his starting job the last two games to Drew Barker. But he insists there are no hard feelings toward UK, his dream school.

“ I definitely keep in touch with my teammates from Kentucky. Me and Drew (Barker) talk probably twice a month, on the Fourth of July weekend I got to go to Chicago for (Jordan) Swindle’s wedding and I was able to see (Jon) Toth, (Zach) Myers, and the Blaylocks (Daron and Zack),” Towles said. “I also still talk to Charles Walker from time to time and of course probably my best friend from the team Zach West.”

He also said 99 percent of UK fans were just like he expected after his decision to transfer.

“They are extremely kind and encouraging and continually wish nothing but the best for me, and for that I’m extremely grateful,” Towles said.

Looking for another reason to like Kentucky freshman offensive lineman Landon Young. Then consider that he often spends Sunday mornings speaking at churches or similar type functions.

“He has gone to a couple of different churches to talk before. They kind of ask questions or he gives testimony about how God put him in position he has,” said Angela Young, Landon’s mother. “He has been blessed with great size and abilities and wants to use them to glorify God.”

Landon Young could be redshirted this season — most offensive linemen are. Or he could be so good that he’ll play at tackle. He doesn’t know and certainly his mother does not. However, she’s ready for the season to be here.

“I am excited for him. I miss him being at home. He touches base with us, but not as often as I would like,” she said. “But I am so excited and can’t want to see what this season has in store. I think this is the season we turn it around and go to a bowl game. We’ve got the boys. We’ve got the coaches. We’ve got the right team to make this happen.”

Finally, by now most of you probably know that Oscar Combs is stepping away from his role on the UK Radio Network’s pregame football and basketball shows that he has been on for about 20 years.

He was the founder of The Cats’ Pause and a man every UK fan knew and most admired. It just won’t be the same without him.

“One of the best things the network did was bringing Oscar on the pregame shows because he has always had that special connection with the Big Blue Nation, to appreciate and understand their concerns, questions, passions, etc,” Leach said. “I remember when the broadcast crew traveled to road games on an RV and Oscar made several trips with us and what a treat it was to hear his stories about his career covering UK sports.

“Oscar has always been a great friend and always there when I need to pick his brain on something —and there’s a lot to pick from there when it comes to the Cats.

“It’s sad that he decided to leave his role on our broadcasts but he’s certainly more than earned the right to follow his heart on this decision and I’m excited to hear about his idea to focus on writing a book or two.”