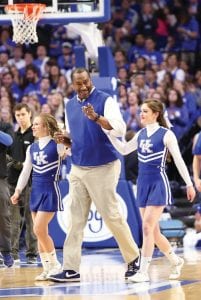 Jack Givens, 1978 Final Four MVP, says coach Joe Hall took the blame for putting pressure on the national championship team but it really was the players who did it. (Larry Vaught Photo)

All during the 1977-78 national championship season, Kentucky was labeled as a team that had no fun.

Jack Givens, the Final Four MVP after scoring 41 points in the title game win over Duke, remembers how the national media portrayed the Wildcats and blasted coach Joe Hall for putting so much pressure on the team.

“We had to endure all year having the national media labeling us as a team that had no fun, played with a lot of pressure on our backs and had a coach that was a tyrant and difficult coach — and that part I agree, he was tough to play for,” Givens said. “We heard all year how we were having no fun and how we were brutalizing the game.”

What the national media — and many UK fans didn’t know — was that the pressure was put there by seniors Rick Robey, James Lee, Mike Phillips and Givens.

“Coach Hall did a great job taking all the blame for that and insulating us from the media,” Givens said during the recent Ohio UK Convention in Franklin, Ohio. “He took all that criticism but the year before we lost to North Carolina (in the East Region final). The juniors said then we are coming in this summer, working every day and we are not going to go through this feeling of falling short again.”

“We had so much fun in San Diego in 1975. We went to the zoo, ate at the best restaurants. We went to the beach and spent some time there. We had fun but we didn’t win. The pressure on us (in 1978), we put on ourselves,” Givens said. “One of greatest jobs coach Hall did was when he stepped in to take the blame and the media didn’t come to us.

“That was 40 years ago and we still are having fun doing stuff. The fun comes from winning and I think our senior class knew that and that’s why any pressure we had, it was pressure we put on ourselves and nothing coach Hall did to cause that.”

Givens still believes Kentucky’s regular-season 95-94 overtime loss at LSU made the difference in UK winning the title that year because of what happened the next game when UK won at Ole Miss. Kentucky had lost its first game about three weeks earlier at Alabama and then lost at LSU when all five LSU starters fouled out in what former LSU coach Dale Brown still calls one of his most remarkable victories.

“As you can imagine, coach Hall was not real happy with us after that game. The next game we played at Ole Miss and we accused him of being crazy but he showed it that night,” Givens said. “The first half I think he made like 35 substitutions.

“If I glanced at bench and he didn’t like the way I glanced, he got me out. James might dunk with one hand and coach Hall would think he should have dunked with two hands and would get him out. He just killed us. At halftime we were ahead, but he screamed at us. He never used real profanity. He used fake profanity — James called it coach profanity.

“It’s hard to look at game where coach just ripped you as a positive but from that day on many days the coaches come to practice and we would already have practice going. They didn’t say a word. They knew our mind was set on winning. A coach would stand up to say something and coach Hall would grab his arm and tell him to sit down. He knew we were on a mission and trusted us to lead the team, and we did.”

Kentucky offensive tackle Landon Young enjoyed getting to play some at tight end during spring practice when UK needed depth because of injuries. Not only did he enjoy the change, but he also says he could catch the ball if it was thrown his way.

“I think there is very little chance there will be a pass to him in the playbook,” Kentucky offensive line coach John Schlarman laughed and said. “If he is at tight end, he’s going to be blocking. He won’t be going out for too many passes.

“We had some injuries to tight end in the spring and there were some packages we worked on with six offensive linemen and Landon was the guy that bumped out. He claims that he can go out and catch a ball down the field, but we will see about that.”

Why? Wouldn’t he be a big target with those great hands he says he has?

“I think you have to be fast enough to get open number one,” Schlarman said. “That could be an issue for him. He runs well but that is a different type of speed to play out there.”

However, he’s happy Scalzo will also be at Kentucky with him.

“I think he will do great in the SEC. He will have (quarterbacks) coach (Darin) Hinshaw and (offensive coordinator Eddie) Gran to prepare him every day,” Ognenovic said. “Right now he is really good. I feel bad for teams that might overlook him or underestimate him because he’s really a good quarterback.

“He is a playmaker and can do anything you ask him. He will get the ball down the field and in the end zone. I have known him since ninth grade. He is very relaxed but has a lot of energy. He can be mellow but on the field he’s going to get the job done.”

The UK freshman was a Mc- Donald’s All-American and fivestar recruit who could be part of a dynamic backcourt at Kentucky this season.

“Coach Cal cares about the kids he has chosen to be a part of the Kentucky family,” said Nitrease Quickley. “He made it clear.

“Every Kentucky fan knows what I have come to know. Coach Cal takes time for people. When we visited, he stopped what he was doing or saying and made time to take a pic or sign an autograph for fans.”

Here’s another nice little touch that Calipari adds during recruiting.

“Coach Cal would send Immanuel inspirational quotes and motivational sayings. Coach works at building kids up,” she said. “I really liked that.”

Quote of the Week: “Defense is as much mindset and knowledge as athleticism. Anybody can be a good defender if they have the physical measurable and the mindset to play defense. He has both to go along with great shooting ability. I think he’s really going to surprise a lot of folks, including some Kentucky fans,” ESPN recruiting director Paul Biancardi on UK freshman Tyler Herro.

Quote of the Week 2: “I am looking at a few things to potentially do to get a little bit more involved with football. Honestly, I am pretty much a full-time farmer now and that’s more than a fulltime job. I think the farm grabs you around the back and pulls you forward,” former UK and NFL tight end Jacob Tamme on becoming a college football analyst.

Quote of the Week 3: “Those guys are mean dudes, and they’re going to get some attention this year because they’re very talented,” tight end C.J. Conrad on UK’s offensive line.