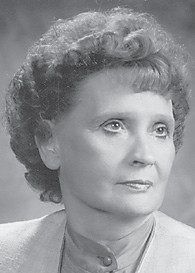 She was born near Keystone, W.Va., to the late Charles and Emma Beaman. Her mother died early in her life and she was then reared by her older siblings, six sisters and three brothers.

Mrs. Berchtold was graduated from Concord College in Athens, W.Va., with a degree in chemistry at the age of 19 and worked for Union Carbide in Charleston, W.Va., and then in coal testing at Godwin Laboratories in Bluefield, W.Va. She also taught chemistry and physics at Bluefield College.

In 1950 she established Standard Laboratories Inc., which now employs 750 people in 16 states with global partners in four countries. She became the first woman president of the American Society of Testing and Materials (ASTM), an organization of more than 32,000 members, and represented ASTM in congressional hearings and was the U.S. representative to International Standards Organization meetings around the world.

A memorial service will be held at November 12 in Lexington.