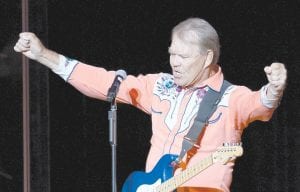 Singer Glen Campbell has been performing his Goodbye Tour. This photo was taken at his “homecoming” show in September in Little Rock, Ark. (AP Photo)

When diagnosed with Alzheimer’s disease, country star and former Arkansas resident Glen Campbell chose not to retreat into privacy.

Instead, he was open about his fate, having fans join him on the last leg of his life’s journey via his stillongoing farewell tour.

At the Hot Springs Documentary Film Festival at the Arlington Hotel that ended in October, producers James Keach (“Walk the Line”) and Trevor Albert (“Groundhog Day”) offered a preview of their new film on Campbell’s descent into the haze of Alzheimer’s.

“It’s become a really big movie,” says Keach. “At first, we just thought we’d see if he could get through this one show; 150 shows later, here we still are.”

They’ve shot 700 hours of film but aren’t done yet. Their final interview will be with Bill Clinton.

“It’s not a movie about Alzheimer’s; every one of those we’ve seen has been profoundly depressing,” Keach says. “Instead, it’s about a man who’s been diagnosed but it doesn’t define who he is.”

It’s rare for filmmakers to share raw footage of works in progress.

“This is something we never do,” Keach says.

“We’re very protective of our work.”

They showed 34 minutes in four segments, discussing each afterward.

In the first on memories, Campbell, 76, watches home movies with his wife of 30 years, Kim, 54, as she tells him who’s in them.

“The science and politics of Alzheimer’s and the music of the Campbell family will be in the movie,” says Albert.

Other segments showed rehearsal sessions and the farewell tour where Glen is surrounded by Kim and their children and band Shannon, Ashley and Cal.

“We’re still not sure what this movie is going to be,” Keach says. “But we know it will be uplifting and entertaining.

“In meeting Glen, we thought we’d have an emotionally disturbing encounter, but he immediately put us at ease with his humor.

“We call him the Buddha; he’s taught us how to live in the moment.”

Producers hope the film will hit theaters next year.

After the screening, which received a standing ovation, Campbell’s daughter Debby; sisters Sandy, Barbara and Jane; brother Gerald; and nephews and niece Steve, Shane and Angela sang a medley of his songs in tribute.