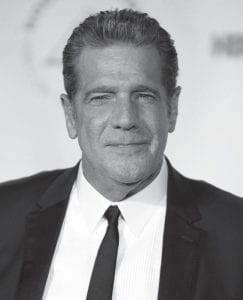 Glenn Frey, founding member of The Eagles, is pictured at the Rock and Roll Hall of Fame induction ceremony on 2014. Frey died Monday. (AP Photo)

As a founding member of the Eagles, Glenn Frey was responsible for some of the biggest songs of the 1970s. A singer, songwriter and guitarist, he co-wrote most of the tracks on the band’s smash 1976 greatest hits album — one of the best-selling albums of all time — with fellow band founder Don Henley, and sang lead vocals on many Eagles hits.

Here’s a look at some of the most memorable Eagles songs by Frey, who died Monday in New York:

— “Take It Easy”: With its glittering guitar opening and touch of country twang, “Take It Easy” was the Eagles’ first single in 1972 and became one of the band’s signature songs. It was mostly written by Jackson Browne, but Frey added a line and sings lead vocals.

— “Tequila Sunrise”: Co-written with Henley and sang by Frey, this heartbreaking song was the first single off the band’s 1973 album, “Desperado.” Frey and Henley also co-wrote the album’s equally heartbreaking title track.