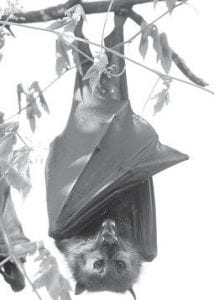 This gray headed flying fox was panting in an effort to cool down at Cabramatta creek in an outer suburb of Sydney, Australia, last January. (AP)

While humans debate at U.N. climate change talks in Bali, global warming is already wreaking havoc with nature. Most plants and animals are affected, and the change is occurring too quickly for them to evolve.

“A hell of a lot of species are in big trouble,” said Stephen E. Williams, the director of the Center for Tropical Biodiversity & Climate Change at James Cook University in Australia.

“I don’t think there is any doubt we will see a lot of (extinctions),” he said. “But even before a species goes extinct, there are a lot of impacts. Most of the species here in the wet tropics would be reduced to … 15 percent of their current habitat.”

But warming isn’t the only concern of conservationists. In Bali, experts warned that measures aimed at reducing green- houses gases – such as building hydroelectric dams as a substitute for coal plants or switching over to biofuels – might have the unintended consequence of reducing biodiversity.

Brazil and Indonesia, for example, are investing heavily in biofuels which environmentalists have warned could replace rich rain forests with plantations which have far fewer species.

As climate change takes hold, the hardest hit species will include plants and animals in colder climates or at higher elevations and those with limited ranges or little tolerance for temperature change, said Wendy Foden, a conservation biologist with the World Conservation Union, which catalogs threatened species.

Butterflies that lived at high altitudes in North America and southern France have vanished, and polar bears and penguins are watching their habitat melt away.

The carbon dioxide emissions that are a leading cause of global warming also turn oceans more acidic, killing coral reefs and the microscopic plankton that blue whales and other marine mammals depend on for food.

“In the long run, every species will be affected,” Foden said.

A few will benefit, chiefly those that breed quickly, already exist in varied climates and are able to adapt swiftly to changing conditions, scientists said. Think cockroaches, pigeons and weeds.

The spread of a deadly fungus that thrives in warmer conditions has decimated some frog populations in South America, Africa and Europe.

Then there are Australia’s flying foxes.

More than 3,500 gray-headed and black flying foxes – huge bats – died in 2002 after temperatures rose above 42 degrees Celsius (107 degrees Fahrenheit) in New South Wales, according to a report published last week in the Royal Society B journal.

The rising temperatures are related to global warming, said the author, Justin Welbergen of the University of Cambridge.

“It got really hot and suddenly started raining foxes from the trees,” said Welbergen, who witnessed the die-off. “It was quite gruesome. This colony had between 20,000 and 30,000 animals and about 10 percent of those individuals died.”

In Australia’s Queensland state, temperatures are projected to rise 3 degrees Celsius (5.4 degrees Fahrenheit), an outcome that could drive half the species to extinction in a mountainous stretch of tropical rain forest, said Williams, the director of the climate change institute at Australia’s James Cook University.

Even a 1 degree Celsius (1.8 degrees Fahrenheit) increase would reduce by half the habitat of the Thornton Peak nursery frog, golden bowerbird and the spottedtail quoll, a catlike mammal.

“There are many species and plants that are restricted to the higher altitude areas,” he said. “It doesn’t take much of an increase in temperature to push them off the mountain. They can’t go anywhere.”

As temperatures rise, animals are seeking cooler climes. In a study of more than 1,500 species, University of Texas biologist Camille Parmesan concluded that 40 percent had shifted their ranges, mostly toward the poles.

A dozen bird species have moved 19 kilometers (12 miles) north in Britain, and 39 species of butterflies have shifted north by as much as 200 kilometers (124 miles) in Europe and North America, according to another study that Parmesan took part in.

Millions of Mediterranean Sea jellyfish have turned up off Northern Ireland and Scotland. The Humboldt squid, which can grow up to 2.1 meters (7 feet) long, has moved up the California coast as ocean waters warmed.

“It’s the latest in a long series of bad news for fishermen,” said Stanford University’s Lou Zeidberg, adding that squid have been found as far north as Alaska in the past five years.

With warmer weather, 60 percent of plant and animal species are migrating, breeding and blooming earlier in the spring, Parmesan said. But not all are, and that could upset relationships between birds and the insects they feed on as well as insects and the flowers they pollinate.

“Frogs, birds and butterflies are responding more strongly to warming winters and springs than are plants,” she said. “The concern is that this will cause population declines for both plants and animals.”

With many species unable to evolve fast enough to adapt, conservationists are considering the creation of natural corridors to encourage animals to move and even relocating them to cooler places. The latter is controversial.