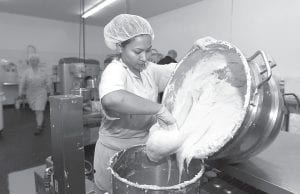 Worker Bertha Domimguez prepared gluten-free dough at Pure Knead bakery sandwich bread in Decatur, Ga. Scientists suggest that there may be more celiac disease today because people eat more processed wheat products than in decades past, which use types of wheat that have a higher gluten content. Or it could be due to changes made to wheat, said the Mayo Clinic’s Dr. Joseph Murray. (AP Photo)

It sounds like an unfolding epidemic: A decade ago, virtually no one in the U.S. seemed to have a problem eating gluten in bread and other foods. Now, millions do.

Gluten-free products are flying off grocery shelves, and restaurants are boasting of meals with no gluten. Celebrities on TV talk shows chat about the digestive discomfort they blame on the wheat protein they now shun. Some churches even offer gluten-free Communion wafers.

“I don’t know whether there’s more people getting this or that more people are noticing” they have a problem, said the Rev. Richard Allen, pastor at Mamaroneck United Methodist Church, north of New York City.

Or is it just another food fad?

Faddishness is a big part of it. Americans will spend an estimated $7 billion this year on foods labeled gluten-free, according to the market research firm Mintel. But the best estimates are that more than half the consumers buying these products — perhaps way more than half — don’t have any clear-cut reaction to gluten.

“We have a lot of selfdiagnosing going on out there,” said Melissa Abbott, who tracks the gluten-free market for the Hartman Group, a Seattle-area market research organization.

Fads aside, research suggests more people are truly getting sick from the gluten found in wheat, rye and barley, but the reasons aren’t clear.

In the most serious cases, gluten triggers celiac disease. The condition causes abdominal pain, bloating and intermittent diarrhea. Those with the ailment don’t absorb nutrients well and can suffer weight loss, fatigue, rashes and other problems.

It was once considered extremely rare in the U.S. But about 20 years ago, a few scientists began exploring why celiac disease was less common here than in Europe and other countries. They concluded that it wasn’t less common here; it was just under-diagnosed.

More recently, a research team led by the Mayo Clinic’s Dr. Joseph Murray looked at blood samples taken from Americans in the 1950s and compared them with samples taken from people today, and determined it wasn’t just better diagnosis driving up the numbers. Celiac disease actually was increasing. Indeed, the research confi rms estimates that about 1 percent of U.S. adults have it today, making it four times more common now than it was 50 years ago, Murray and his colleagues reported Tuesday in the American Journal of Gastroenterology.

That translates to nearly 2 million Americans with celiac disease.

Celiac disease is different from an allergy to wheat, which affects a much smaller number of people, mostly children who outgrow it.

Scientists suggest that there may be more celiac disease today because people eat more processed wheat products like pastas and baked goods than in decades past, and those items use types of wheat that have a higher gluten content. Gluten helps dough rise and gives baked goods structure and texture.

Or it could be due to changes made to wheat, Murray said.

In the 1950s, scientists began cross-breeding wheat to make hardier, shorter and better-growing plants. It was the basis of the Green Revolution that boosted wheat harvests worldwide. Norman Borlaug, the U.S. plant scientist behind many of the innovations, won the Nobel Peace Prize for his work.

But the gluten in wheat may have somehow become even more troublesome for many people, Murray said.

That also may have contributed to what is now called “gluten sensitivity.”

Doctors recently developed a definition for gluten sensitivity, but it’s an ambiguous one. It’s a label for people who suffer bloating and other celiac symptoms and seem to be helped by avoiding gluten, but don’t actually have celiac disease. Celiac disease is diagnosed with blood testing, genetic testing, or biopsies of the small intestine.

The case for gluten sensitivity was bolstered last year by a very small but oftencited Australian study. Volunteers who had symptoms were put on a gluten-free diet or a regular diet for six weeks, and they weren’t told which one. Those who didn’t eat gluten had fewer problems with bloating, tiredness and irregular bowel movements.

Clearly, “there are patients who are gluten-sensitive,” said Dr. Sheila Crowe, a San Diego-based physician on the board of the American Gastroenterological Association.

What is hotly debated is how many people have the problem, she added. It’s impossible to know “because the definition is nebulous,” she said.

One of the most widely cited estimates comes from Dr. Alessio Fasano, a University of Maryland researcher who led studies that changed the understanding of how common celiac disease is in the U.S.

Fasano believes 6 percent of U.S. adults have gluten sensitivity. But that’s based on a review of patients at his clinic — hardly a representative sample of the general public.

Other estimates vary widely, he said. “There’s a tremendous amount of confusion out there,” Fasano said.

Whatever the number, marketing of foods without gluten has exploded. Those with celiac disease, of course, are grateful. Until only a few years ago, it was difficult to find grocery and dining options.

“It’s a matter of keeping people safe,” said Michelle Kelly, an Atlanta-area woman who started a gluten-free, dairy-free, soy-free, nut-free bakery in 2010 after her son was diagnosed with celiac disease. While conventional bakers use wheat flour, she uses such ingredients as millet flour, sorghum flour, brown rice flour and tapioca starch.

At one of Atlanta’s largest and busiest health food stores, Return to Eden, manager Troy DeGroff said over a third of his customers come in for gluten-free products for themselves or their family.

“Thank you, Elisabeth Hasselbeck,” he said, referring to one of the hosts of the daytime talk show “The View” who helped popularize gluten-free eating.

It’s hard to say how many of his customers have a medical reason for skipping gluten. But “they’re at least paying attention to what they’re sticking in their mouth,” he said.

On a recent Friday afternoon, several customers bought gluten-free, though none had been diagnosed with celiac disease or had digestive problems from eating wheat.

Julia White said she picks up gluten-free items when her granddaughters visit. They’ve been diagnosed with problems, she said. “They don’t just make this up.”

Another customer, Meagan Jain, said she made gluten-free cupcakes with a school friend and liked the taste. But she doesn’t buy gluten-free often because “it’s expensive.”

For her, “It’s a fad. It’s part of the eclectic, alternative lifestyle.”