‘Go back where you came from!’ 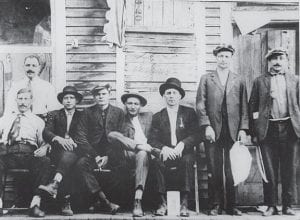 Possibly because this newspaper is published in Letcher County, Kentucky, whenever we hear that slur—“Go back where you came from!”—whether flung from the White House or anywhere else, we think of Srur Dawahare and his family.

Born near Damascus, Syria, in the 1880s, Srur fled murderous religious persecution and reached New York City in the early days of the 20th century, nearly broke and speaking no English. He found work in a sweatshop, met and married Selma Cury, and sought a better life. Selma’s brother, living in Norton, Virginia, wrote to urge the young couple to come to the rapidly developing Appalachian coalfields, and they moved to Letcher County.

Srur started out here as a peddler, toting everything from buttons to skillets in a cumbersome backpack, from coal camp to coal camp. He did well enough to open a small store in Neon in 1917, and was able to provide work for a few other Syrian immigrants. (In this photo, from 1917, they’re in front of the store, with Serur standing at the left.)

The Dawahares opened a larger store in 1922, and one thing led to another. Srur and Selma had 11 children, and Srur was determined that each of his eight sons — three of whom he named after U.S. presidents — would have a store of his own.

And so it came to pass, and then some. From that humble beginning in Neon, Srur and his sons over the course of the next century opened more than 30 Dawahare’s Department Stores in Kentucky, Virginia, and West Virginia. The Dawahares were known for their fairness — to customers and employees alike — and for their commitment to their communities. They famously supported local charities, public housing, education, sports, and regional economic development. Indeed, it’s hard to think of a family that has done more for eastern Kentucky.

How did they pull it off? There weren’t many Syrian immigrants in our corner of this world a hundred-plus years ago. It’s easy to imagine that at some point someone told Srur to go back where he came from, possibly even after he had become a citizen. Think what we would have lost if he had followed that advice.

Instead, as his children grew he told each of them what the family came to call “The Stick Story.” He would give the child a small pile of sticks. “Break them,” he would say. That was easy. Then he would align the sticks together in a bundle. “Break that,” he’d say. None of them could. “If you stick together,” Serur told his children, “you will never be broken.”

It was true. Unfortunately it’s also true that after a century of success and service, the Dawahares found themselves overtaken by vast nationwide economic changes — first the advent of Wal-Mart and other big-box stores, then Amazon and other online giants — which eventually forced their chain of modest “family department stores” into bankruptcy in 2008. But for everyone old enough to remember, their name remains permanently synonymous with good citizenship. (And here in Whitesburg, after being vacant for a decade their old store was recently born anew as Dawahares109 Pizza and Subs.)

Which takes us back to that harsh epithet: “Go back where you came from!” Whenever we hear it, whatever we think of the source or the target, we should think about what could be lost if we closed our doors and hearts to people whose principal crime is hoping for a better life.

We should think about the possibility that in some detention center in Texas today there’s a child who, given a break, might grow up to lead her community, or her nation.

And, as Americans, we should remember “The Stick Story.” Played off against each other, for whatever reason or purpose, we can be divided, and broken. But if we could somehow see past the slurs and figure out how to stick together — well, who knows what we might accomplish?