Goat rescued after month on highwall 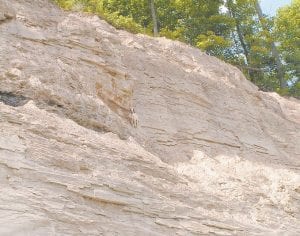 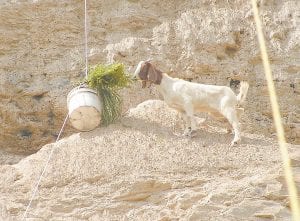 Employees at a Letcher County coal company were able to rescue a goat which was trapped on top of a highwall for nearly a month.

Jeff Mullins, superintendent of Enterprise Mining Company’s Roxana preparation plant, said he first noticed the Boer goat standing on a highwall about 45 feet from the ground while he and his wife were traveling in an off-road utility vehicle on June 28.

"I thought it could get off the strip wall anytime it wanted to," said Mullins. "Goats can travel in some very rocky, steep areas."

Mullins said he was surprised to see the goat still on top of the highwall, located about a mile from the prep plant, when he returned to the site about 12 days later.

"I never thought much about it and did not return to the area until around July 9," said Mullins. "Sure enough, the goat was still there and I walked to the other end of the area and saw that the goat was not able to get off the wall."

Mullins said the highwall is located on a strip mine that was reclaimed four or five years ago. He said he isn’t really sure how the goat ended up on the highwall, but said a mudslide occurred on one side of the highwall near the end of June. He thinks the goat may have fallen from the top with the mudslide.

Mullins said because the goat didn’t look any worse for wear the second time he saw her he decided not to bother her for a few more days and give her the chance to get off the highwall on her own.

"I thought I would give it a few more days to make sure," said Mullins. "I did not want to do anything to spook the animal and cause her to fall. I went back to the area on July 13 and the goat was still there."

Mullins said he and the prep plant’s day shift foreman, Gary Griffith, went to the top of the highwall on July 13 and placed a rope around a tree so they could get food and water to the goat.

"During this time we tried to come up with a plan to get the goat down," said Mullins. Mullins said the goat was situated about 45 feet up from the ground and 25 feet from the top.

"You could not get any closer than 20 feet from the top edge and feel safe," said Mullins. "Anything you did from the top was a guess."

Mullins said the highwall is located in an area that wasn’t covered under a mining permit and that state and federal law prohibit equipment from being on the site.

"It would have taken dozer work to get a boom truck or cherry picker to the site and I’m not sure how much good it would have done," said Mullins. "If we had a boom (truck) I think she would have just moved to another area on the wall."

Mullins, with help from other workers, eventually built a wire cage and attached a rope to it in hopes of luring the goat inside.

Although the cage was kept baited with food and water, it was still some time before the goat would venture inside. When the cage was hoisted on July 23, the goat put her front feet on it but became scared after the structure tilted downward.

"When she put her front feet on the cage it tilted down a little and spooked her," said Mullins. "She would not get around the cage. We left the area hoping she would get used to the cage."

Mullins said workers continued to send food and water to the goat in a bucket using a pulley system, and that the goat finally made its way into the cage on July 27.

"After work we went to the area and as we approached she got out of the cage," said Mullins. "We let the cage down and filled it with food and water. This time, when we hoisted the cage to the ledge she ran right to it and jumped in."

Mullins said one of the workers was able to pull a rope attached to the cage door and shut it.

"Two of us pulled the cage from the ledge and the guy holding the cage rope let her to the ground," he said.

Mullins said the goat jumped from the cage when it was lowered to about five feet off the ground.

"When she stood up she had a weed in her mouth chewing on it," said Mullins.

Since the goat was rescued it has been staying in a 12-by-12 dog lot at Mullins’s home. He said his wife, who has named the goat Nellie, bought carrots, cabbage, tomatoes and potatoes for the goat, but that the goat will eat none of it.

"She loves the blackberry vines growing in the lot," he said. "Finally we tried dried dog food and she loves it."

Mullins said he is now trying to find a nice home for Nellie.

"It may be hard to do but she has been through enough and I would like to find her a place to live the rest of her life in a nice, level area and not be taken to market," he said.